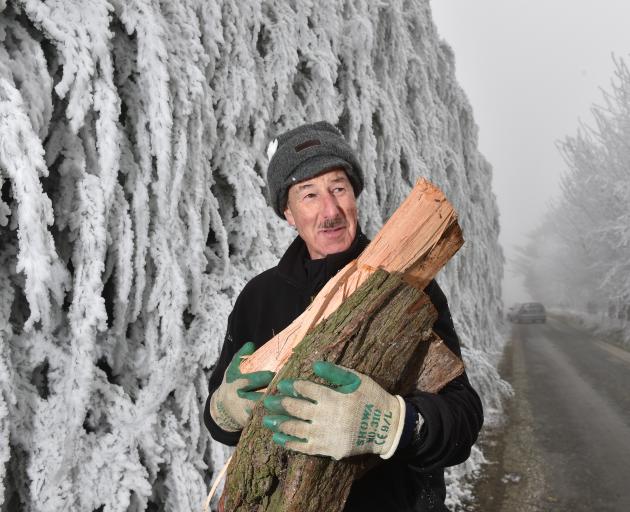 Rod Baxter, of Alexandra, spent yesterday afternoon helping his brother Euan split macrocarpa to warm up his brother's small heritage cottage in Fruitlands during a hoar frost. PHOTO: GREGOR RICHARDSON
You might call it living in a fridge, but for Euan Baxter, of Fruitlands, it has been his winter life for the past 30 years.

At Fruitlands, about 15km south of Alexandra along State Highway 8, a hoar frost has blanketed the area since the end of last week.

Just a few kilometres either side, there was no frost to be seen - leaving Fruitlands an isolated winter wonderland.

His brother Rod was helping him split firewood to heat his home yesterday afternoon, which had had intermittent power over the past three days, he said.

It was only a minor inconvenience, he said, as the wood would heat the cottage he had lived in for the past 30 years.

He could light the fire, cook and heat water without power.

Mr Baxter said he had experienced worse - his coldest year at Fruitlands was in 1996, when the mercury dropped to -21degC, meaning he had to pick frozen sheep off the ground.

This year, the temperature was slightly more manageable.

``This is quite healthy - it's nice and fresh, crisp and clean.''

The hoar frost was welcoming passers-by as well.

While the Otago Daily Times was passing through Mr Baxter's property at least 10 people were seen taking pictures of the chilly winter conditions.

``We had 100 people wandering through the property [on Sunday],'' Mr Baxter said.

It was just another winter for Mr Baxter - cutting metres of firewood, living in a frosty heritage cottage with power lapses and admiring the winter beauty around his land.

``It's a brisk cold; it's not damp - you can still dry your washing as long as it doesn't freeze.''

MetService said the forecast for Alexandra today was a high of 3degC with heavy rain in the morning, turning to snow at night.

The Queenstown Lakes district would also need to prepare for evening snow but coastal Otago was forecast to have only heavy rain.