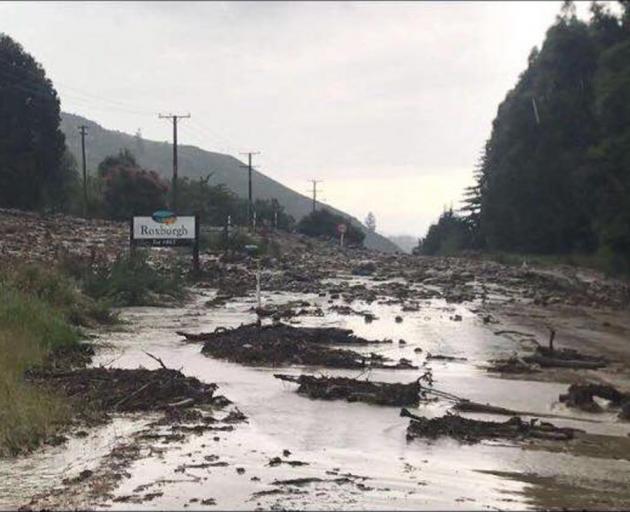 Flooding on SH 8 near Roxburgh in 2017. Photo: CODC
The local authorities which dealt with the Teviot Valley's flooding issues received mixed report cards at last night's "meet the candidates" session in Roxburgh.

The Central Otago District Council and Teviot Valley Community Board's response to the 2017 and 2018 flooding was praised by several candidates, who said the community had also rallied and the civil defence emergency had brought out the best in the district.

But the Otago Regional Council still needed to do more to help Teviot Valley residents, some candidates said.

Central Otago mayoral candidate Tim Cadogan said he would keep up "the fight for fencing down Reservoir Creek while the regional council and Department of Conservation keep faffing about".

Mr Cadogan also said he was proud of his fight to try to save the Stand Children's Services camp in Roxburgh, and "it still hurts" to have lost the fight.

Mayoral candidate Victoria Bonham said she thought the Teviot Valley was overlooked by local government and she wanted to highlight its attributes and get the council to consider investing in affordable housing in the district.

Community board candidate Raymond Gunn said it was also vital to keep pressure on the NZ Transport Agency to maintain roading standards after flooding. Businesses along State Highway 8 suffered when motorists were diverted through Roxburgh East when the state highway was closed.

The six Otago Regional Council Dunstan candidates were also at the meeting. They have been hosting "meet the candidates" sessions in Central Otago and the Queenstown Lakes district and their next meetings will be in Cromwell tonight and Alexandra on Sunday afternoon.