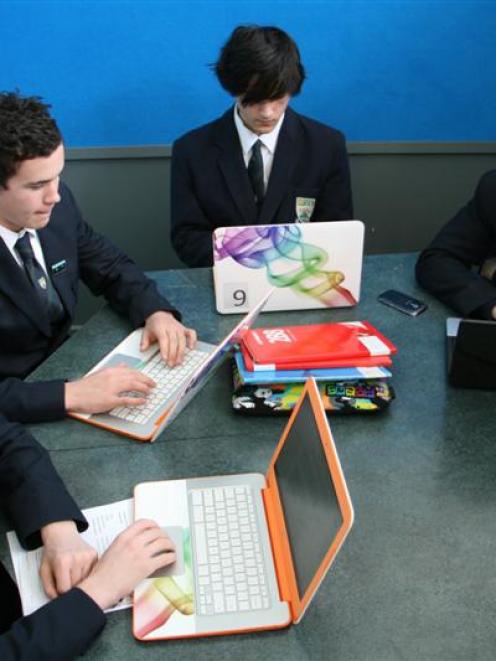 Roxburgh Area School Year 12 pupils (from left) Toby Grice (17), Jack Lennon (17), Jezreel Matchitt (16) and Taylor Hair (17) take part in a physics e learning class last week. Next year, pupils will have the option of learning Asian languages via e lessons, after the school was part of a group to win funding for a new programme. Photo by Liam Cavanagh.
Four Central Otago schools will benefit from new funding for Asian language classes.

More Asian language classes will be available to the pupils of Maniototo Area School, Roxburgh Area School, Dunstan High School and Cromwell College, from next year.

The Ministry of Education announced the first round of successful applicants for its $10million Asian Language Learning in Schools programme. The four Central Otago schools are among 18 Otago schools to receive funding.

The funds will be available to schools for the next three years, the aim being to increase the number of Asian language classes in schools.

In the first round of funding, 22 groups, with members from 129 schools, will receive a share of $3.3million for the classes.

The groups are generally made up of several schools that will share the classes through online learning portals or traditional lessons.

The 18 Otago schools, mostly high schools and some area schools, will have access to the classes through their membership of the online learning portal group NetNZ.

NetNZ made an application to the contestable fund on behalf of its members, which also includes 19 schools from Canterbury, and seven from Southland.

It already provided some of these classes through the e learning portal, but the funding would develop beginners classes though to NCEA level 3, Mr Pullar said.

A ''huge part'' of the money would go towards employing new teachers. The online portal allowed pupils to access courses their own school might not provide, and was especially good for rural schools.

Courses were provided by participating member schools as part of the curriculum, as well as other non member schools around the country. Two more schools in Otago and a further nine in Canterbury also made successful applications for the contestable fund.

Logan Park High School deputy principal Peter Hills said the funding was not only good for Otago schools, but for all schools around the country.

''The Asian languages are certainly becoming more prevalent and students can see that,''Otago Secondary Principals' Association chairman and Mt Aspiring College principal Wayne Bosley said he was not aware of the details, but it was a ''positive step forward'' for Asian languages.

All schools ''relished'' the opportunity to include more languages in curriculums, and the funding ''certainly'' supported long term teaching and learning of languages in the classroom, he said.

Parliamentary private secretary for tourism and Waitaki MP Jacqui Dean said the funds would have a ''huge'' benefit for pupils and the Central Otago region.

''Tourism is hugely important to the region and as the number of Asian visitors continues to grow having young people with Asian language skills will be hugely beneficial.''

''I think it's a very good thing for Central Otago from an economic development perspective,''It was a wonderful opportunity for pupils to study these languages, and would help to create a better understanding of multiculturalism, he said.