Graves revealed during a bioarchaeology project at Drybread Cemetery near Omakau include those of Chinese gold-miners and infants.

The project is being led by University of Otago anatomy professor Hallie Buckley and Southern Archaeology director Peter Petchey.

Dr Petchey said they were invited to the site by the Drybread Cemetery Trust, which was concerned records were incomplete because of a fire in the 1930s.

Of the 20 unmarked grave cuts, six were able to be identified by matching locations with surviving records, and were not investigated further.

The team had investigated 12 burials of 10 adults and two infants so far. 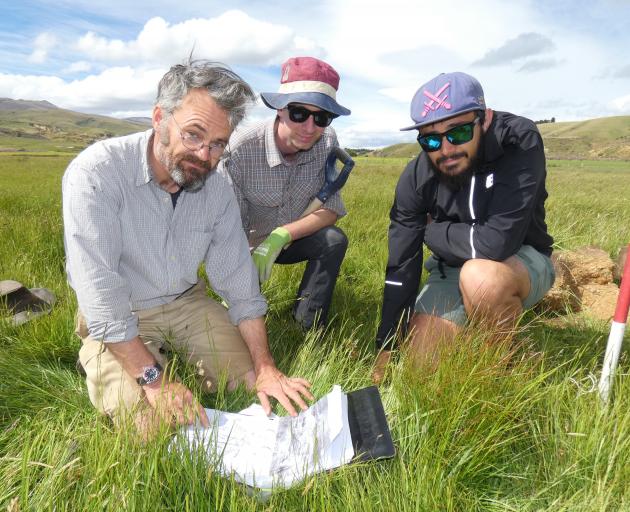 Using a photograph from the 1860s or 1870s to help identify the site of the former Drybread settlement are (from left) Peter Petchey, archaeologist Jeremy Moyle and archaeology student Bradley Goodall. PHOTO: SIMON HENDERSON

Six of the burials were probably Chinese, and one of the burials had been previously exhumed, probably for transport on SS Ventnor, which sank in 1902, about 15km from Hokianga Harbour.

The burials at Drybread Cemetery appeared to date from the late 19th century, based on the designs of the coffins, many of which had Victorian decorative details, including ornate plates.

The former settlement of Drybread was also identified during the project.

The township lay in the path of hillside sluicing operations, so all the tailings, or mud and debris could have covered it up to 12m deep.

"The township itself is almost certainly buried — we just don’t know how deep," Dr Petchey said.