Harvest off to a sparkling start 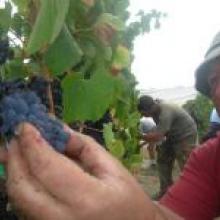 Viticulturist Grant Rolston picks pinot noir grapes at Quartz Reef winery. Photo by Rosie Manins
The first grapes of what is believed to be Central Otago's largest wine crop are being picked at Bendigo.

The Quartz Reef Winery's Loop Rd vineyard near Tarras had a team of 32 workers picking pinot noir grapes yesterday, to be made into the winery's 11th vintage of sparkling wine.

Viticulturist Grant Rolston said this year's bumper 8ha crop of pinot noir and chardonnay grapes for the sparkling wine would produce about 80 tonnes of the intoxicating liquid.

He said the weather in spring last year and this summer had created the perfect conditions for grapes to grow, and cool evening temperatures at the moment would flavour grapes yet to be picked for still wine.

‘‘We had a wonderful flowering in December which really set us up, and it's been as near to the perfect season as you can get. The quality of what we are taking off vines is outstanding,'' he said.

‘‘We don't like them [sparkling wine grapes] to be overripe, because the sparkling wine demands about 20 brix [a percentage measurement of sugar] as opposed to the still wine which is about 24 brix,'' he said.

The winery owns about 25ha of vines at Bendigo, most planted in pinot noir and pinot gris vines for still wine varieties. Those grapes would remain on the vines until after Easter, Mr Rolston said.

He said labour had been reasonably hard to secure during January's cherry harvest in the district and winegrowers were trying to source as many workers as possible before what would be a busy main grape-harvest in April.

‘‘This will be the biggest vintage Central Otago's ever seen in terms of tonnage. It's a bumper crop,'' Mr Rolston said.

Winemaker Rudi Bauer estimated half of the 48,000 bottles of Quartz Reef sparkling wine would be sent to strong overseas markets in Britain, the United States, and Australia.

‘‘The amount we send away and keep within New Zealand is about 50-50. We also supply some markets in Europe and Asia,'' Mr Bauer said.

He said the indicators from overseas markets were very good, and this season was promising in terms of the quality and quantity of grapes.

Central Otago Winegrowers Association president Martin Anderson said at his best estimate, the district would produce about 10,000 tonnes of grapes for wine production this year, which compared with 6000 tonnes in 2006.

Mr Anderson did not believe winegrowers would be short of workers, and said despite the heavy crop, most vineyards would have organised labour already.

He said the markets in Australia, the United Kingdom and the US were strong and likely to get stronger.

‘‘The feedback has been extremely positive. Australia is starting to increase its demand [for Central Otago wine] after it was in a position of glut for quite some time.

‘‘They [Australians] have managed to clear their stockpiles and it's becoming quite a good market for us now.''