Historic Vulcan Hotel up for sale 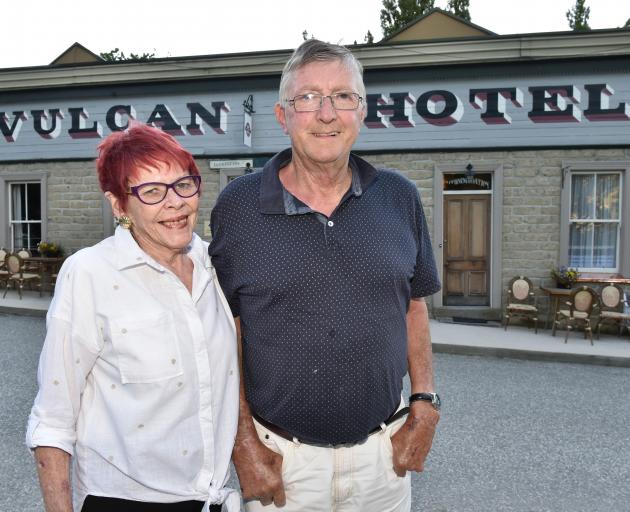 Vulcan Hotel publicans Jude and Mike Kavanagh are calling it a day after 19 years at the historic St Bathans pub. Photo: Gregor Richardson
There have been ghostly appearances, sub-zero temperatures and "a lot of fun with the locals".

But after 19 years of owning the Vulcan Hotel, owners Jude and Mike Kavanagh are calling it a day, putting the St Bathans hotel up for sale.

Mrs Kavanagh said they were looking forward to retirement after a lifetime of working in the hospitality industry, but when the hotel did sell they would "miss it like hell".

"We’ve had a lot of fun with the locals over the years and they’re the first ones to come in and give you a hand if anything goes wrong ...  You meet lovely people here every single day."

Legend has it the ghost is the "Rose of St Bathans", a young woman who died in one of the rooms of the hotel more than 100 years ago.

"I’m not a great believer in ghosts, but I’ve seen shadows, and you never feel as if you’re on your own," Mrs Kavanagh said.

"A lot of guests ask to be put in her room, and there are lots of reports of people being gently pressed in their bed, or hearing chains drag along the floor. But she’s a nice ghost, she’s not nasty."

The Kavanaghs started leasing the St Bathans hotel 19 years ago and bought the freehold property a decade later.

Along the way they have weathered floods, a fire in the hotel and those "good old Central Otago winters".

"Back in 2013 we had six feet of snow in the village, and I remember a frost once of -22degC. But we haven’t had anything like that for a few years — things have been pretty mild. This year the coldest was only -12degC," Mrs Kavanagh said.

"But you just keep the fires burning and put an extra jumper on. The pub’s always warm."

Mrs Kavanagh said it was good to see growth in St Bathans.

It has a permanent population of just eight and another estimated 15 holiday homes. But "there are a few sections and a house for sale. It’s good to see some more people coming along".

She said there had been a lot of interest in the hotel since it was listed for sale earlier this year, "but the right person hasn’t come along yet ...  It needs some younger people. We’ve done our dash."