By Simon Henderson
0 Comments
While school may be out for a former Central Otago school bus, the education continues.

It is a return to its roots as Dora was first fitted out as a school bus in Alexandra about 35 years ago, before being converted to a digital learning centre in 2012.

As a celebration of its history the bus was piped along Tarbert St by piper Keith Cameron before parking in front of the Alexandra Library.

For Earle Bailey, of Alexandra, it was a chance to revisit his past.

Keith Cameron, of Clyde, pipes Dora the digital bus down Tarbert St yesterday morning. Photos: Simon Henderson.
He drove the bus as a school bus and hire vehicle until he retired.

His main route was picking up children from Fruitlands to take them to schools in Alexandra, he said.

Mr Bailey was once again able to take a seat behind the wheel when the bus visited Alexandra, and joked "we’re back in control".

"That bus had quite good seats on it and it was used quite a bit for charters and things like that — it was a comfortable bus."

He thought it was "marvellous" that Dora was now being used for digital education, Mr Bailey said.

Stepping Up programme manager Sue Kini, said people came on board because they wanted to know more about online banking.

People were guided through tasks such as bank account transfers and automatic payments.

The courses also covered how to identify online scams.

"We talk about dodgy-looking emails and what to look out for."

As well as classes in Alexandra, Dora the digital bus will be offering free courses across the region, including in Clyde, Roxburgh, Millers Flat, Naseby, Ranfurly, Oturehua and Omakau. 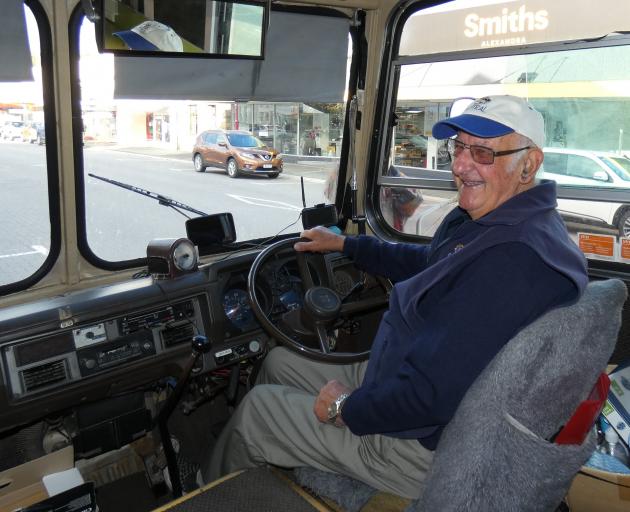 Earle Bailey, of Alexandra, gets comfortable in the driver’s seat of the former school bus now used for digital education.
Rural Women New Zealand national president Gill Naylor, of Alexandra, visited the bus yesterday and said it was a fantastic service for people in rural areas.

Rural women who had taken part in the courses had enjoyed them and now felt far more comfortable with digital banking, Mrs Naylor said.

One of the issues around closures of bank branches in rural areas was the banks handled business as well as personal banking.

"They need to have places where they can get change, and bank their money — all that sort of thing — because there is still cash out there," Mrs Naylor said.

"We do still need to use cash."

Being able to be more confident with online banking was helping, she said.