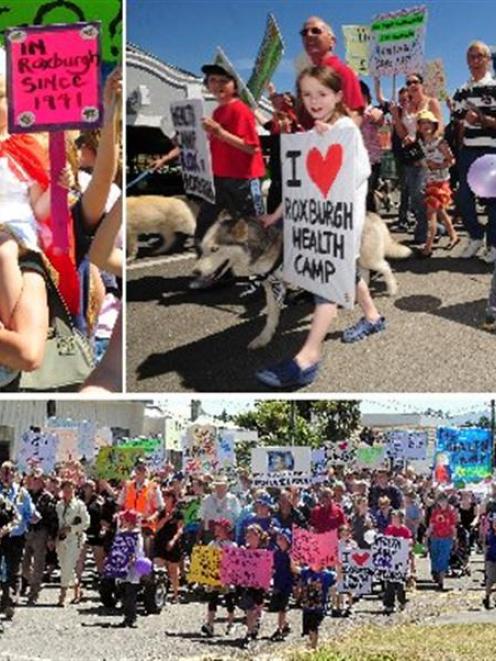 Starting at midday on Abbotsford St near the Roxburgh Area School, marchers chanted their way through the town while holding banners displaying support slogans.

"Save our camp", "What do we want? Health Camp. Where do we want it? Roxburgh", "Keep our camp", and other loud chants were repeated throughout the 30-minute march.

Gathering at the Memorial Park bandstand, where a pipe band played, the crowd listened to impassioned speeches from Dr Macpherson as well as Roxburgh resident and Otago Regional councillor Gerry Eckoff.

"What kind of society is this where there is money for the healthy and wealthy, money for international boat races and cultural events, and no money to help our children who need it the most? Certainly no society I want to be a part of, especially when there is an increasing demand for the camp's services rather than a decreasing need," Mr Eckoff said.

Some marched with their dogs, others with friends and family. Two riders on Segways (two-wheeled electric vehicles) made their way down the street.

Trucks and cars tooted their horns in support as daily life in the town of about 740 residents was briefly interrupted.

Television camera crews filmed the march, as did local residents on home video recorders, while almost everyone else took photographs.

The camp is a mainstay of Teviot Valley employment, with about 42 staff, and caters to children from families throughout Central Otago as well as outside the district.

Central Otago District Council staff and Roxburgh Community Board members stood by their voters in the march.

Roxburgh Health Camp's immediate fate lies in the hands of government officials, with a $5 million funding shortfall for the New Zealand camps looming.

The outcome of an independent financial review, which is likely to determine the camp's fate, is expected to be released within the next few weeks.