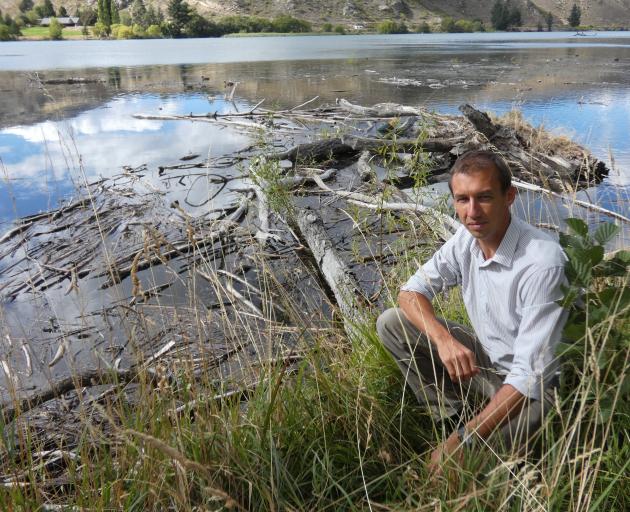 Lake Dunstan Charitable Trust projects manager Duncan Faulkner shows some of the detritus built up along Cromwell’s Lake Dunstan, Kawarau Arm foreshore. PHOTO: JARED MORGAN
The legal definition of what a lake bed is could force a national power company to clean up Cromwell’s lakefront.

A year in the making, the Lake Dunstan Charitable Trust (formerly known as the Guardians of Lake Dunstan) may have claimed a victory over Contact Energy to force it do more to clear the lake’s Kawarau Arm of driftwood, silt, aquatic weed, and other debris.

The energy giant is unconvinced.

"But the lake has now transitioned back to river because of the silt."

The area in question involves how Contact manages the visual effect of the stretch of the lake from the confluence of the Kawarau and Clutha Rivers, past the Butchers Dr boat ramp, the Cromwell Heritage Precinct, up to beyond the Bannockburn Bridge, he said.

That was governed by Contact Energy’s Landscape and Visual Amenity Management Plan which was reviewed every five years via a consultation process with the affected parties and the Central Otago District Council (CODC).

Once accepted by the CODC at a local level, the plan then went to the Otago Regional Council (ORC) for sign-off, Mr Faulkner said.

That was a process that had been repeated since 1997 but it was last year’s sign-off that came under trust scrutiny.

It was the scope of the management plan the trust questioned because it only included what was below the waterline — particularly the interpretation of what constituted the "lake bed", Mr Faulkner said.

"The lake level fluctuates and that should be provided for."

"His statement to ORC was the definition of lake bed is very clear."

Yet, the draft 2020 version of the plan had not taken that into account and the trust, with Mr Gardner-Hopkins’ support, was now challenging the interpretation.

The ORC notified the trust on Monday stating it agreed with the definition and now the ball was in Contact’s court.

"We are hoping Contact will step up and engage with the community in terms of how the area should look and make changes.

He described a "serious disconnect" between the Cromwell community in terms of how it expected the foreshore to look and what was being delivered and it should not have have taken the trust to point that out, Mr Faulkner said.

Contact Energy head of hydro generation Boyd Brinsdon said the company was aware the ORC had sought a legal definition.

Contact had a responsibility to manage the effects of its hydro-generation activities at the Clyde Dam on the landscape and visual amenity of the Kawarau Arm.

The question for the company was whether the foreshore was an area outside of its activity and the normal fluctuation level of the lake, which was about a metre, he said.

Contact regularly cleared the foreshore of debris and the last time was in December.

Company representatives were happy to discuss the issue but that had been delayed by discussion about the legal definition, Mr Brinsdon said.