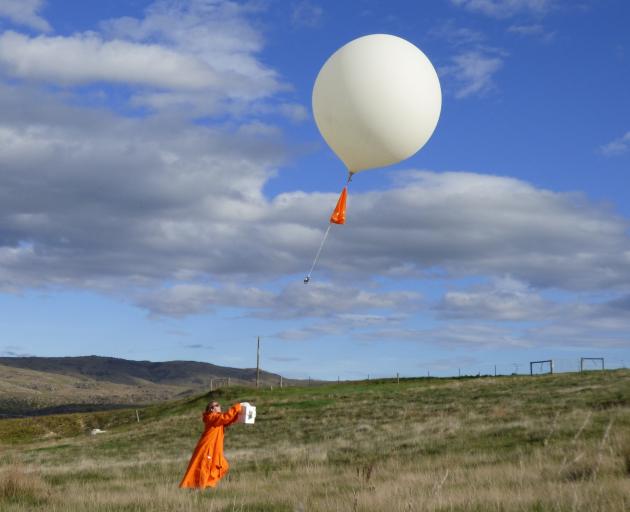 PhD student Jordis Tradowsky prepares to launch a balloon with attached climate instruments in windy conditions. The data will be compared against measurements taken from Nasa's Atmospheric Tomography Mission, which flew over Lauder on Monday as part of its round-the-world trip to gather atmospheric data. Photo: Rebecca Nadge.
A NASA aircraft on a global mission to gather climate data passed over Central Otago on Monday evening, but few were around to see it.

The two-year mission left from California and involves four flights around the world across each season, varying in altitudes between 0.2km and 12km. While in the air, instruments on board monitor the concentration of trace gases in the atmosphere.

The aircraft left Fiji on Monday morning, flying over the subantarctic islands and heading above Niwa's Lauder base, where atmospheric scientists were watching from below. From there, the flight continued to Christchurch.

Niwa atmospheric scientist Dave Pollard said the flight was significant for the Lauder scientists, who would compare their data with what Nasa recorded. Low cloud on Monday meant the flight path above Lauder was higher than planned, but the scientists on board were still pleased with the trip, he said.

''They were getting quite excited about an hour before they got here because at 40,000 feet they got into the stratosphere and measured a lot of ozone up there.''

Immediately after the aircraft passed, Lauder scientists launched radio and ozone sondes into the atmosphere via a balloon to measure temperature, humidity, pressure and ozone.

Lauder instruments would be calibrated against Nasa's measurements and in turn Nasa could calibrate its satellites.

Measurements from Lauder would be uploaded into an international archive that Nasa could access. Like data from Lauder, measurements taken from Nasa's mission would be used to help improve climate models.

''The satellites in particular are looking at source attribution, so looking at where the greenhouse gases are actually coming from.

''That gives us a much better idea for running climate models about how these systems work.''

The aircraft makes its final flight above Central Otago in May.

This is not man made it happened before....climate change money spinner