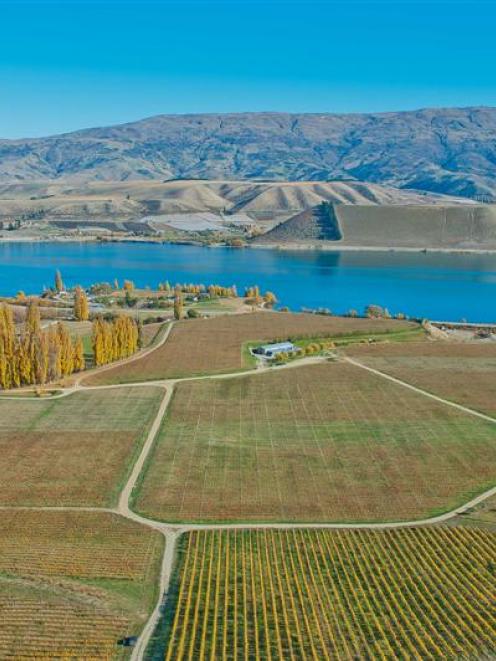 Looking over the Northburn Station vineyard towards Lake Dunstan. Photo supplied.
The potential investment in a Central Otago vineyard by a global luxury goods group is ''ecstatically good news'' for the region, a wine industry leader says.

Subject to gaining Overseas Investment Office approval, the 23ha Northburn Station vineyard at Cromwell and The Shed cellar door and function centre on the same site will be sold to Cloudy Bay Vineyards.

''I think this is a real coup for Central Otago wines for a major player like this, a global luxury brand, to be putting a stake in the ground,'' Northburn owner Tom Pinckney said yesterday.

He declined to disclose the potential sale price but said he was delighted such a well-respected company had endorsed the region by signing up for the properties.

''It says a lot about Northburn as a sub-region for wine and is a real endorsement of Central Otago as a wine-producing area.''

It was business as usual for now and he was not anticipating any problem with OIO approval.

He and wife Jan bought Northburn Station, northeast of Cromwell, in 1993 and run sheep and cattle on the 13,000ha property.

They diversified into grapes in 1999 and opened The Shed on the property in 2008.

They would remain on the farm and the sale of the vineyard and function centre was good timing, he said. It would give him more time with his young family and to explore new projects ''which I'm keeping under my hat for now''.

As well as focusing on the farm, he would continue to grow the Northburn 100-mile mountain run, launched four years ago, which attracted endurance athletes from around the world. ''We won't be getting out of wine altogether, though. We'll remain the most important part of the wine industry - consumers.''

''To have Cloudy Bay in the region is a wonderful endorsement of what this area's wine industry has achieved and continues to achieve and the profile we've generated,'' Mr Dicey said.

The deal would have ''fantastic'' spin-offs for Central Otago winegrowers.

''It will mean our wine, Central Otago wine, will get in front of a lot more consumers from all around the world, because of the iconic brands involved, and pinot noir drinkers are inquisitive and will want to know more about the area.

''It will do a power of good for Central Otago and develop new markets and contacts that would have taken us years to reach.''

He was confident Cloudy Bay would help build the district's brand. Cloudy Bay New Zealand estate director Ian Morden, of Marlborough, said the company was ''very excited'' about the prospect of buying the vineyard and function centre.

''From our perspective, the Northburn Vineyard is a special site and fits very well with our aim of making pinot noir in New Zealand at the highest level.''

Cloudy Bay had been exploring investment in Central Otago for a few years. If the deal went through, Northburn would be the company's first vineyard in the district, Mr Morden said.