Queenstown Courthouse. Photo supplied
A farm  manager lit a fire in his Central Otago employer’s home and staged a burglary in a bungled attempt to cover up his ongoing theft of cash from the couple.

The next day he lit a fire in his own home on the farm, traumatising his children and putting his wife in hospital.

Shane James Lyon (39), who appeared by video link in the Queenstown District Court before Judge Bernadette Farnan yesterday, repeatedly lied to police about the incidents.

The offending occurred over the course of nearly a year from September 1, 2018, when he began living and working with his family on Olrig Station, a 6000-hectare property in the Galloway area near Alexandra.

Soon after Lyon arrived on the farm, his employers Elliot and Nichola Heckler noticed cash going missing from their kitchen, mainly small amounts but on a few occasions, a few hundred dollars.

The owners set up covert trail cameras around the property but they were stolen or disabled.

On August 13, 2019, while the owners were away, Lyon went to the homestead, took $180 cash from the kitchen, put a tea towel in the oven and turned it on.

He broke into a gun cabinet and took out four rifles, loading some and arranging them in a way to give the appearance they had been dropped by fleeing burglars.

Having second thoughts about the arson, he turned off the oven, but not before it had been destroyed by the fire.

Lyon later told police he had disturbed burglars before dousing the fire.

The next evening, he lit a fire near the back door of his own accommodation while his wife and two children were inside.

He raised the alarm and evacuated his family, but did not call the fire brigade or attempt to fight the small fire, which was put out by a neighbour soon afterwards.

His wife, who had suffered a heart attack three weeks earlier, was taken to hospital where she was kept overnight due to the stress of the incident.

Two days later, Lyon called Mr Heckler to say he had been confronted by two masked men early that morning,

who had threatened to harm his children if he did not co-operate.

The station owner reported the incident to police as a home invasion, prompting local schools to take extra security precautions.

Since his arrest and while on bail, the defendant had claimed to have been shot by a third party, but the claim had no credence and police had not laid charges in relation to it.

The defendant accepted a sentencing indication by Judge Farnan in the Alexandra District Court last September.

He admitted a representative charge of burglary between September 1, 2018, and August 16, 2019, while his remaining charges related to offending in 2019: burglary and arson, on August 13; arson knowing that danger to life was likely to ensue, on August 14, and three charges of making a false statement to police, on August 13, 14 and 16 respectively.

Judge Farnan sentenced him to two years’ prison and ordered him to pay $7050 in reparation for the stolen cash, the destroyed oven and firearm cabinet, the missing trail cameras and the repairs to the defendant’s accommodation.

He is subject to post-release conditions for six months to enable counselling or other treatment as directed by the probation service. 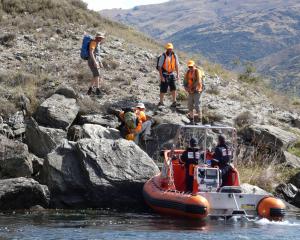