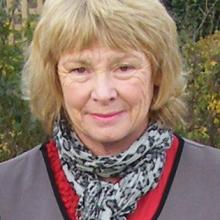 Sue Hore
Maniototo stalwart Sue Hore has been farewelled in a service that honoured her commitment to her family, farm and the wider district.

Mrs Hore died suddenly at her Stonehenge property on Sunday and her funeral service was held in the Patearoa Hall yesterday.

About 1000 people attended the service, filling the hall and outdoor seating and standing areas.

Mrs Hore's sons, Charlie and Andrew, a former All Black, spoke during the service of what a "remarkable woman" their mother was.

They said they had been overwhelmed by the response from those in the Maniototo district and further afield to their mother's loss.

Others had previously spoken of Mrs Hore's kindness and generosity, and the selfless way she helped so many.

Mrs Hore's family were widely known and respected in the rural sector, including through helping run the Patearoa dog trials.

There was a guard of honour of Patearoa Collie Club members and former Stonehenge employees.

Maniototo opera singer and long-time friend of the Hore family David McAtamney sang How Great Thou Art during the service.

The main street of Patearoa was overflowing with the vehicles of those attending the service, which was followed by a country-style afternoon tea in the Patearoa Hall.