Moustache of 40 years to go 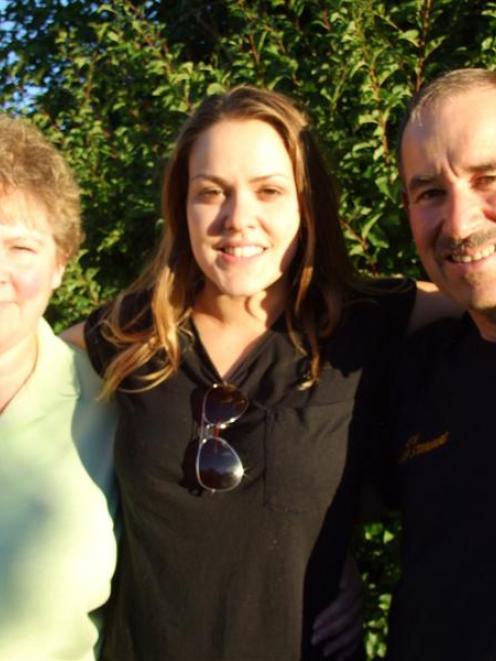 Jan, Kyla and Barry McKenzie reflect on Kyla's childhood battle with cancer. Photo by Sarah Marquet.
After battling cancer as a child, Alexandra woman Kyla McKenzie (26) is now hoping to help others.

As a 2-year-old living in Invercargill, she was diagnosed with a Wilms' tumour (nephroblastoma) the size of a tennis ball on her left kidney.

For the next 18 months, she endured chemotherapy which caused her to lose her hair.

''It was thanks to the dedicated doctors, nurses and surgeons and the innovative strategies they used that I survived this ordeal with no lasting effects.''

An operation to remove the tumour saw her lose part of her left kidney, but it has since grown back.

While she does not remember much from that time, her Invercargill-based parents do.

''She came into bed one morning, it was a Sunday, and she had a sore stomach. I had a feel around thinking it was appendicitis and found a lump I thought may have been a hernia ... by Wednesday, we were in Dunedin,'' her mother, Jan, said.

Her father, Barry, a builder, tried to be with Kyla for all procedures and chemotherapy sessions she endured.

''I got called up at work and had to go down for a CT scan. It was a really hot February day and I had to put a big lead apron on. They put her in the scanner and what did Barry do - he flaked, fainted,'' he said.

The hardest thing for him was not seeing his daughter sedated for chemotherapy; stuck in an isolation ward because she had no immunity or seeing her scared face when the needles came out. It was the rejection.

''All the way through, she had ulcers in her mouth. It was so bad that she couldn't eat, and basically, I would come home from work and get rejected. All she wanted was her mum.''

Since Miss McKenzie recovered, she has repeatedly nagged her father to shave off his moustache.

''Not because I didn't like it, but because I have never seen him without it,'' she said.

Mr McKenzie has had his moustache for about 40 years. Even Mrs McKenzie has never seen him without it. But he would only do it if his daughter shaved her head for Cure Kids.

February 8 is the big day, the day after older sister Sheena's wedding in Wanaka.

They set themselves a goal of raising $10,000, fundraising under the name NO MO, NO FRO.

Anyone wanting to help the McKenzies can do so via http://www.fundraiseonline.co.nz/nomonofro/