No warning before pole on property 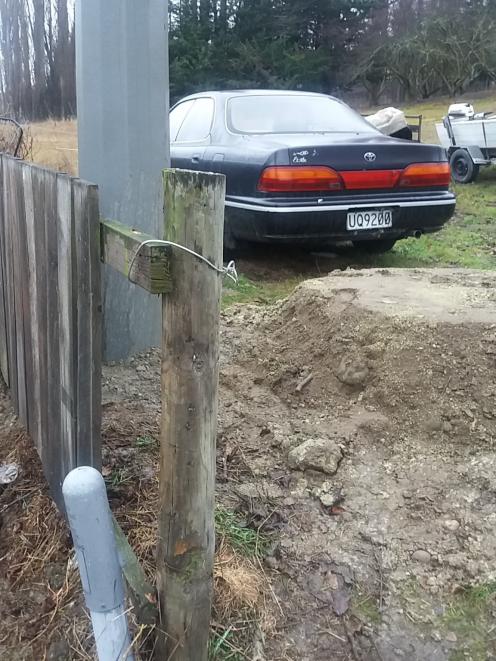 A 45cm-high pile of dirt is left behind after a power pole was replaced on Clive Cullen’s Letts Gully Rd property earlier this week. Photo: supplied.
Aurora Energy has issued another apology over power pole replacement work done near Alexandra on Monday, after a new power pole was installed on a man’s property without his knowledge.

Aurora had already apologised to 123 Letts Gully Rd residents when a technical issue meant they had not been told of a six-hour power outage on Monday in freezing weather.

Clive Cullen, who lives on Letts Gully Rd, said as well as not knowing about Monday’s power outage, he had not been told of the power pole replacement that day on his property. He arrived home to find the new power pole, a fence that had been broken by the work and a pile of dirt about 1.5m in diameter and 45cm high.

The power pole replaced one which was in the same place, just within his boundary, beside a fence. It looked like about 3m of the fence had been taken down to do the work and most of it had been put back, but a 30cm stretch had not been replaced, and some fence palings were broken, Mr Cullen said.

He said he understood the power pole replacement work needed to be done and did not want an apology from Aurora, but thought he should have been advised of the work, and wanted the dirt cleared away and fence repaired.

An Aurora spokesman said the power pole was replaced "in line with necessary upgrades to the electricity network".

Aurora’s mapping system had shown the pole to be on road reserve, and Aurora apologised for any  inconvenience the work had caused.

The dirt had since been removed from Mr Cullen’s property, the spokesmen said. They did not reply to questions about whether the fence had been repaired.Any property owners who believe there has been damage to their property as a result of work near their properties can contact Aurora on 0800 220005.

● Various power outages planned throughout Otago for today, yesterday and on Tuesday because of Aurora’s power pole replacement programme, including another two in Letts Gully Rd, were cancelled because of extreme weather conditions. For an update of power outages go to www.auroraenergy.co.nz/outages