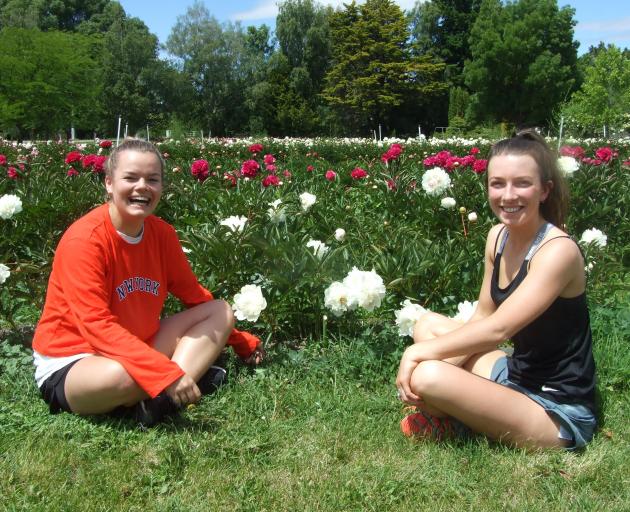 Clyde Orchard workers Millie Townsend (21) and Georgia Matheson (21) try to blend in with the rows of peonies at Omeo Peonies, owned by Clyde Orchards. PHOTO: TOM KITCHIN
The peony season is winding up early in Central Otago this year and for one peony farm this year's blooms are its last hoorah.

Omeo Peonies, which has been in existence between Clyde and Alexandra for 30 years, will be closing and the flowerbeds will be moved to Roxburgh.

Manager of the site's owner Clyde Orchards Kris Robb said it would extend its orchard operations to the peony land.

Clyde Orchards bought the Omeo Peonies site on Hawley Rd, between Alexandra and Clyde, about three years ago.

``The business was inherited with the land purchase and we've run it for three years but all the flowerbeds are ageing and they need rejuvenated,'' Mr Robb said.

``We decided it was a good time to ... stick to what we know best, which is fruit production.''

It had sold the peonies to Stone House Gardens in Coal Creek, between Lake Roxburgh Village and Roxburgh.

Stone House Gardens owner Mary-Anne Webber said the peonies would not be planted until next year, just before the season began.

She had not been in the peony business before, but it had been her dream for a long time.

``The peony purchase is a perfect complement to our business. I've got a very longstanding interest in gardening and horticulture.''

Omeo Peonies was started in 1986 by Tony and Jude Banks.

Across Central Otago peony farm managers said the early spring, lack of rain and absence of heavy frost changed the timing of the season, but otherwise picking was normal this year.

Mrs Calder said this was her first year in the peony business and the season had been a ``hardcore five weeks''.

``With the extreme heat, half the flowers came within four days.''

Luckily, a colder spell helped her business and they kept relatively stable.

If the hot weather kept up this week, Mrs Calder said they should finish operations by the end of this week.

Rusty Kampjes, of Kampjes Garden, in Alexandra, said the season had been ``extraordinarily early.''

``We normally start at the beginning of November; we started 10 days early,'' she explained.

They also planned to finish by the end of this week.

They will hold an open day this Sunday.

Peonies from Central Otago are exported around the world, as far as United States and the Middle East.