The grand designs are the brainchild of Rory McLellan and his wife and business partner Karen and both projects promise to give Alexandra’s Tarbert St a much-needed lift.

One, dubbed the Riverside Park Project, is being developed under a trust arrangement and is designed to open lower Tarbert St to the Clutha River.

Mr McLellan, a member of the Riverside Trust, said despite being a river town, Alexandra had no waterfront as such as there was virtually no link to the town itself.

The first step was to develop the river bank — an area encompassing about 1000sqm. The plan included terracing the area and installing a floating pontoon, and other ideas for the site were being considered. 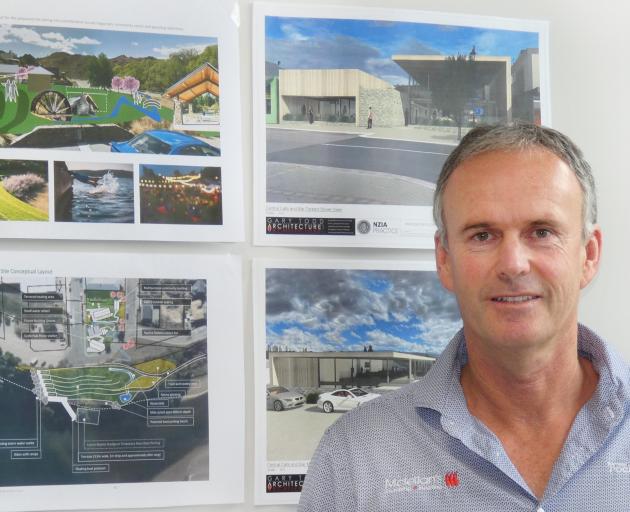 "We’re making steady progress and we hope to be shovel-ready soon.

"We are working through changes of land ownership and securing some funding."

The riverside park and pontoon would help the commercial and private boats on the river, open up the river to the town centre and create a park for all to enjoy, he said.

"The whole idea of this is it creates a public space for tourism, for the cycle tracks to converge and for locals."

Up from the river at the intersection of Tarbert and Rivers Sts, a public space was envisioned that could feature a cafe and the potential for ticket sales for river cruise operators.

The second project involves only Mr and Mrs McLellan and is to develop 19-21 Tarbert St, which they own.

The site includes three empty buildings that were once the Hotel Alexandra and the Town and Country Club and latterly Shooters.

He said he and his wife could see the need for entertainment for the youth of the town and for a hub for events in the town centre.

What evolved over a year of planning and working with Gary Todd Architecture was a multipurpose building on the 1000sqm space comprising three bars, including a rooftop one, a cafe, restaurant, takeaway outlet, an events/function venue and accommodation.

"We’re getting consent-ready and work could start early in the new year."

Mr McLellan said while the projects could seem ambitious, it was now or never.

"Interest rates are at record lows and it is a case of seizing that window of opportunity."

He had seen Alexandra’s town centre change from a thriving service centre to a shell of its former self.

"There is now over 18-plus shops and buildings empty. Every existing business needs support and a vibrant town centre."

Mr McLellan said the projects would draw business back.

"Build it and they will come."