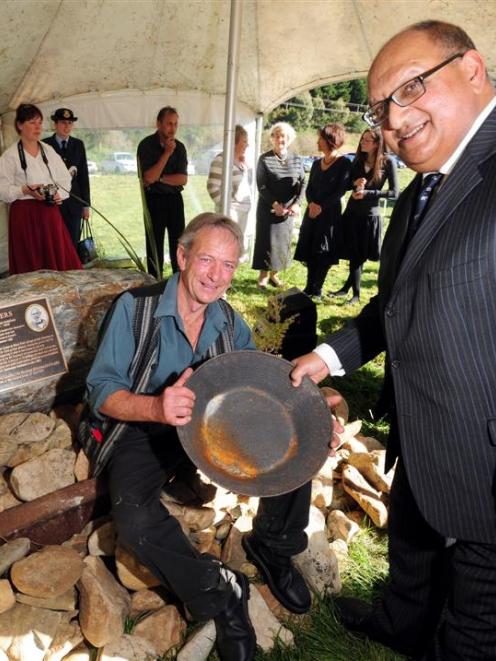 More than 200 people, including Governor-General Sir Anand Satyanand and his wife, Lady Susan, gathered at a simple Glenore paddock, near Milton, for a ceremony that many believe was a century and a-half in the making.

It was fitting this country's first Governor-General of Indian descent was on hand to ensure the memory of Peters, himself from Mumbai, was celebrated.

A simple plaque, commemorating Peters' achievement, was unveiled by Sir Anand while he and other speakers spoke about how his efforts helped propel the Otago goldrush and establish the province as the country's first significant economic powerhouse.

The Glenore-Manuka Trust, headed by Glenore farmer Alan Williams, has spent the past few years researching and planning yesterday's gathering which they believed was a moment to put history right and acknowledge Peters, whose exploits went largely unrecognised for decades.

His discovery of a workable goldfield came three years before Australian prospector Gabriel Read made his publicised find near Lawrence.

In his address, Sir Anand said gold had always held a fascination for man.

The story of Edward Peters spoke to all migrants, especially those of Indian descent, who have and continue to make a valued contribution to New Zealand society.

For Mr Williams and his trust, the gathering was the end of a massive effort to have Peters recognised.

A book penned by Mr Williams was also launched at the event while the monument and plaque, unveiled yesterday, will soon be shifted to its permanent resting place at the nearby Mt Stuart Reserve, which borders the south branch of the Tokomairiro River where Peters first made his mark.