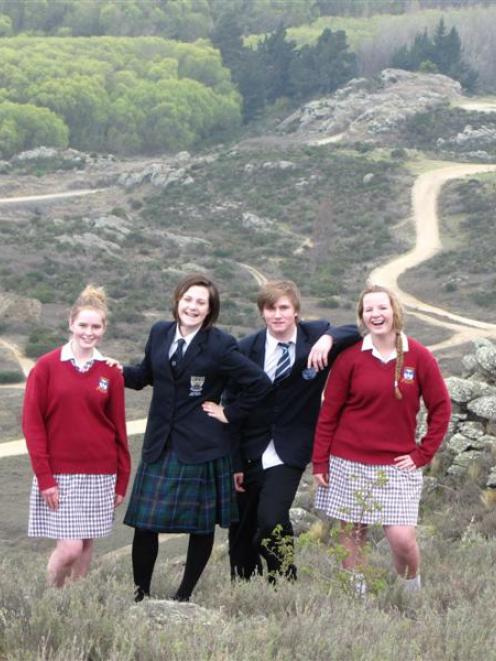 Janie Shaw (left, 15), of Dunstan High School, Ruby Parker (15), of Roxburgh Area School, Shea Lawrence (15), of Maniototo Area School, and Hermoine Kemp (15), of Dunstan High School, will be taking their cyberbullying message to a teachers' conference in Hamilton. Photo by Sarah Marquet.
Cyberbullying is the act of bullying someone using the internet, mobile phone or other technology to hurt somebody, harass or embarrass them. With advancements in technology, it has become a major problem in our society. Reporter Sarah Marquet meets a group of young people who are tackling the issue in their community.

Cyberbullying is a problem in Central Otago, a group of young people say, but they are determined to do something about it.

In term one, they embarked on the Central Otago Reap Sticks 'n' Stones Cyberbullying Project, which has earned them a presentation spot at an international teachers' conference in Hamilton during the school holidays.

It began with the announcement of funding from the Ministry of Social Development to target bullying. Karla Sanders, a teacher and now project facilitator, visited Central Otago schools to ask for volunteer pupils to form a group.

Shea Lawrence (15), of Maniototo Area School, said pupils were more likely to listen to people from their own peer groups.

''Parents and adults can't really get the message across ... kids are more likely to listen to us.''

About 40 pupils from Roxburgh Area School, Dunstan High School, Maniototo Area School, Cromwell College and Mt Aspiring put their hands up to be involved in the project.

With help from Reap, they formed a committee ''so that we can help raise awareness to our peers about cyberbullying and how to stay safe online'', Ruby Parker (15), of Roxburgh Area School, said.

One of the pupils in the group, said she was inspired to join because of her own experiences with bullying through ask.fm.

It went on for three months but she overcame it by talking to people and deleting her account.

''I had my friends that helped me throughout this challenging time.

''They told me that it was all lies and just people being pathetic because they have nothing better to do with their lives but pick on others that are more vulnerable,'' she said.

A survey of year 7-13 pupils from across the district, and conducted by the group, found a third of them had been bullied.

Of all the pupils surveyed, 75% (744) responded and 34% admitted to having being bullied this year, with 39% of those experiencing cyberbullying.

The group's message is not just to be aware of cyberbullying and how it can happen, but if it does, how to deal with it, Shea said.

Mrs Sanders said she had been amazed by the commitment shown by the pupils.

''One of the things that really struck me was that they are totally committed to making a change. They're not just here for the ride.''

Roxburgh Area School principal Gary Pasco said it was great this was a pupil-led project.

''Cyberbullying is one of the issues that we face and it's really good to have young people who are probably most active in this area doing something about it.''

The project goes further than just a presentation to teachers.

A requirement of the funding was that they set up a website, design and deliver a programme to schools and run community events.

The sticksnstones.co.nz website and programme will be officially launched at public events in Wanaka, Cromwell, Alexandra and Ranfurly in the first week of December.

Hermoine Kemp and Janie Shaw (both 15), of Dunstan High School, and Ruby and Shea will travel to Hamilton to make their 75-minute presentation in the second week of October.

The Ministry of Social Development has provided $72,000 for the project, which has been administered through Central Otago Reap.

Cyberbullying survey
Selected results from the Central Otago Reap Sticks 'n Stones Cyberbullying Project survey of year 7 to 13 pupils in the district (744 responses).
• 34% had been bullied.
Of that: 73% experienced verbal bullying.
39% cyberbullying.
24% physical bullying.
7% other bullying.
• 55% said peer pressure was a big issue.
• 2% did not feel safe in their community.
• 87% thought cyberbullying was an issue for young people.
• 25% had posted something online that they had regretted.
• 32% thought adults did not respond appropriately when informed of cyberbullying incidents.
• 19% choose not to use social networks (Facebook, Tumblr, ask.fm etcetera); 18% use them every day and 12% use them multiple times a day.
• Most popular form of social networking was texting (75%) followed by Facebook (65%)
• 20% feel pressure to use social networking to keep up to date.
• 34% said their schools did not teach them about being online and managing risks.
• 60% said boredom was an issue for people in their community, 47% thought drugs and alcohol were issues and 44% thought bullying was an issue.
• 55% thought young people were not consulted and/or listened to about those issues.

Plan for cemetery to double in size