'Save Our Bank' protest 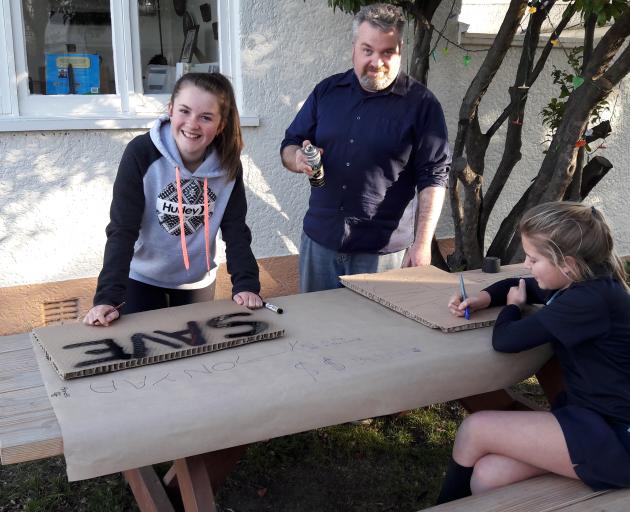 Getting their placards ready for the protest on Friday are (from left) Madi Pont (13), of Kyeburn, Luke Anthony, of Ranfurly, and Kassidy Pont (11), of Kyeburn. PHOTO: AMIE PONT
Opposition to the proposed closure of the Maniototo's only bank is ramping up.

A ``Save Our Bank'' protest, scheduled for 1pm on Friday in the car park opposite the bank, will ``reflect what life is like in the Maniototo'', the area's business group head, Amie Pont, said yesterday.

``It's a multifaceted life, with a focus on farming, tourism, the [Otago Central] rail trail, all sorts of things and we hope our protest will reflect all those elements.''

The community has rallied in support since the proposed closure of 19 branches of Westpac, including the Ranfurly branch, was outlined to bank staff last week. In two of those 19 places - Ranfurly and Fairlie - Westpac is the only bank in the town. No date was given for the closures. Bank management said communities had a fortnight to make submissions on the matter.

A public meeting called by Waitaki MP Jacqui Dean on Friday in Ranfurly attracted about 100 people, who vowed to fight the proposed closure.

``There's been a great response since the meeting, a huge outpouring of support; everyone's coming in saying let's keep the momentum going,'' Mrs Pont said.

Because it was the only bank in town and a strong case was being presented to retain the facility, residents felt there was a ``good chance'' the branch might remain open.

``We still haven't been given any justification, any reasons for the closure of the bank,'' she said.

A wide cross-section of the Maniototo community, and supporters, was expected at this week's protest.

``This is something that matters to everyone; it's about the future viability of our town for future generations, '' Mrs Pont said.

She expected young people, business owners, farming contractors, farmers, ``mums with prams'', volunteers and other residents of all ages to express their feelings at the protest.

Several people at the public meeting said they wanted one of the Westpac officials behind the decision-making process to visit the town and meet residents. If the bank closed, residents would have to travel 90km to Alexandra to do their banking.

Shirley Hunter, of Ranfurly, drew laughter from the audience on Friday when she said: ``The council might have to widen the rail trail so our mobility scooters can get to Alexandra.''