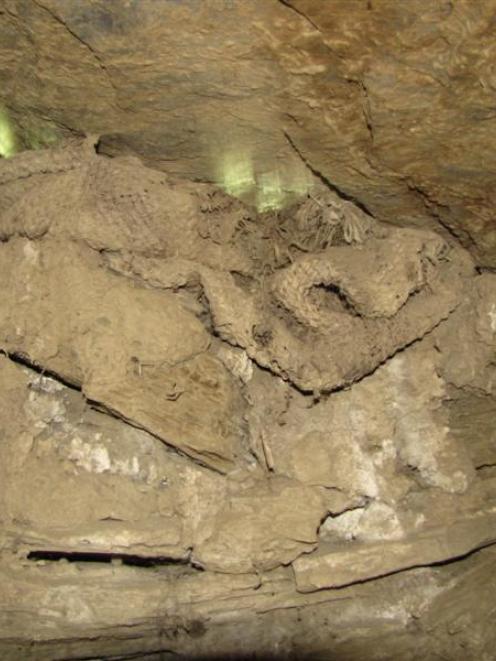 The textile as it was found. It is about 40cm long. Photos by Sarah Marquet.
A trip down the Clutha River, through the Roxburgh Gorge, yesterday uncovered something unexpected - a new artefact, a piece of woven textile similar to one removed last month.

Last month a collection of historic artefacts, including what was thought to be a fragment of a Maori sleeping mat or food bag, European textile and a moa bone, were removed from the gorge by Department of Conservation (Doc) staff, following identification in an archaeological report done as part of consents for the Roxburgh Gorge cycle trail. 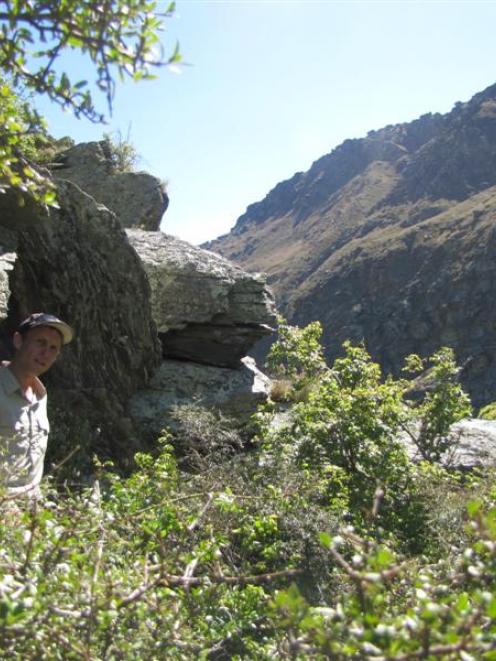 Roxburgh Gorge cycle trail project manager Tim Dennis stands by a hut where the new artefact was found.
At the time this new piece was found, cycle trail trust member Barrie Wills said it looked like it could be the same kind of material as that which is thought to be of Maori origin.

This new piece was found in a hut on Doc land downstream of Davis Bend and is thought to have already been investigated by a Doc archaeologist and staff.

It was at the back of the hut, wedged on to a small natural rock ledge and appeared to have been coated in mud.

Near the entrance to the hut there were also old broken pieces of glass and cans.

New Zealand Historic Places Trust regional archaeologist Matt Schmidt the piece would probably be removed, as the others had been last month, due to the cycle trail running close to the hut and the traffic that would bring, to protect it from "pilfering". It was possible there were still other things out there as "lots of people have been out there over the years".

These were Maori, then the 19th-century miners and more recently, the Depression miners - those who sought gold during the 1930s.