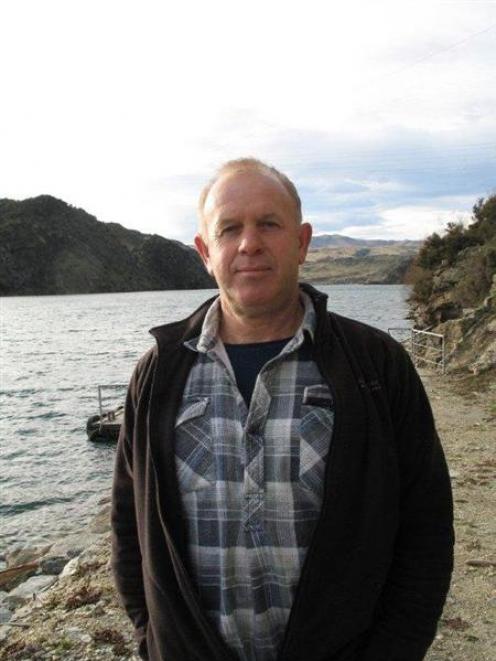 Roxburgh Gorge Trail Trust chairman Stephen Jeffery at the Roxburgh dam end of the gorge trail. Photo from ODT files.
A part of the Roxburgh Gorge cycle trail has been completed and, once the adjoining section is also finished, a jetty will be installed so people can reach that portion of the trail.

The completed 3km section runs across a Shingle Creek property, about 8.5km from the Roxburgh dam and near where the trail has had to be realigned following a geotechnical report on the landslip known as the Narrows.

Trail trust chairman Stephen Jeffery said the only thing left to do on that section was to spread some gravel, but it would not be economical to do so until the section next to it was also up to the same stage.

The trust has gained a land use easement for that next section, over Mt Benger Station, and Mr Jeffery said he hoped construction could begin there soon.

When that section was completed, it would create a 12km trail to the dam and a jetty would be installed for people wanting to access the trail from the Alexandra end by boat.

He said that section could also link with the completed part of the 73km Clutha Gold cycle trail, from the dam to Lawrence.

Construction of the Roxburgh end of the Clutha Gold trail is well under way.

Clutha Gold trail trust chairman Rod Peirce recently said it would be done soon and some parts were at the same stage as the Shingle Creek section.

Construction on the middle section of the 34km Roxburgh Gorge trail has yet to start but a statement released by the trail trust this week said negotiations with the owners of Gorge Creek and Obelisk Stations were progressing.

The statement said both those properties were involved in the tenure review process and so any easements could take time.

Work on the Alexandra end of the trail has yet to restart after the trust stopped construction in January when landowners Bruce and Leigh Johnston raised safety concerns.

The Johnstons and the trust have been negotiating since then with the trust hoping to gain access to a route over the Johnstons' property that had a better alignment than the one over the marginal strip.

Mr Jeffery said if an agreement with the Johnstons was not reached soon, then they would continue with construction on the Crown land for which they already had consent.