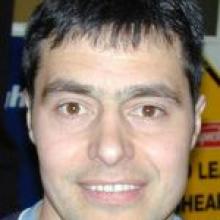 Dion Morrell
Much of Central Otago's shearing community has stopped work in order to support those involved in and affected by a fatal van crash near Poolburn on Thursday morning.

A shearing gang of six, employed by Alexandra-based contractor Dion Morrell, was travelling in a Toyota Previa van to an Ida Valley farm when the crash occurred about 6.15am.

Stewart Hetaraka Smith (20), of Mataura, and Lavenia Setefano (19), of Gore, died at the scene of the single-vehicle crash on the Ida Valley-Omakau Rd about 6km northeast of the Poolburn hotel.

Mr Rimene, who is the uncle of Mr Morrell's two daughters involved in the incident, was awaiting assessment last night.

A 36-year-old Gisborne man, who was initially taken by ambulance to Dunstan Hospital at Clyde with moderate injuries, was discharged yesterday.

Speaking from Dunedin Hospital yesterday, Mr Morrell said both of his daughters were "OK", although they had each undergone up to eight hours of surgery.

Mr Morrell's 20-year-old daughter Pagan Rimene was in an intensive care unit yesterday, in a stable condition and due to be moved into a ward.

Ms Rimene was driving the van when it crashed.

"She may have to have more surgery," Mr Morrell said.

His 17-year-old daughter Larniel's pelvis was broken and she also had shoulder injuries.

Mr Morrell said she had "quite a bit" of surgery ahead of her, although she was in a stable condition.

Despite living through the "roughest" couple of days of his life, Mr Morrell said the support he and family members had received since the crash was "awesome".

"It has been bloody incredible. There's no real way of dealing with something like this," he said.

Mr Morrell, who has other children based in Central Otago, said he had plenty of people around him in Dunedin and his phone had been ringing "hot" with supporters from outside the city, including other shearing contractors.

He delayed all work at his business until Tuesday for fellow employees to mourn the loss of two colleagues and injury of four others.

"We are quite a tight-knit bunch. We are not a large operation - just big enough to be a family.

"[Mr Smith and Ms Setefano] were very close friends with a lot of other employees. It is not an aftermath comment when we say they were really cool people.

"They were the kind of people you hope your kids turn out to be like, because you would be so proud. We have many characters in our industry and those two were genuinely neat people," he said.

Mr Morrell's shearing business employs between 50 and 55 people at this time of year, operating from Alexandra and Wedderburn.

Although work has stopped for a few days, Mr Morrell said the most urgent part of his shearing season finished before the crash.

Mr Morrell's daughters had been involved with the business since its inception, about three and a-half years ago.

"They're both top wool handlers and one had just started shearing," he said.

His daughters' recovery would be a matter of months, rather than weeks, and he would be spending a lot of time in Dunedin with them.

Police had no further information on the crash, or the investigation into what happened, yesterday. It could be eight weeks before an investigation is complete.

Detective Sergeant Derek Shaw, of the Central Otago CIB, said it was likely some, or all, of the van's occupants were not wearing seatbelts. Police have yet to speak with the four survivors.

They were keeping an open mind about factors in the crash, but fatigue and speed were likely to remain at the centre of attention, he said on Thursday.