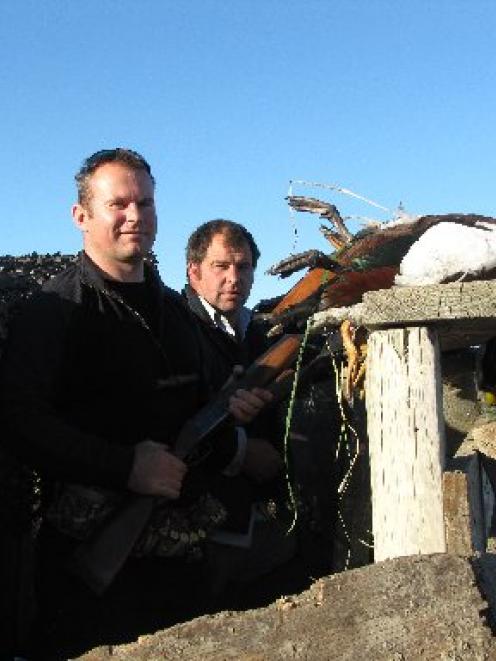 Doug Reid (left), of Queenstown, and Geoff McAtamney, of Lauder, scan the skies for ducks on Mr McAtamney's farm near Lauder on Saturday. Photo by Sarah Marquet.
Do they know they have a target on their heads and is there such a thing as duck heaven, I wondered as I watched six ducks fly high over the road while waiting to pull out of my driveway on the opening day of the duck-shooting season.

I had been told that opening weekend is massive in this region, that big rugby games are rescheduled, that people come from far and wide to take part.

Towards the end of last week camouflage gear became a regular sight on the streets and in the cafes of Alexandra and people began to speculate on the weather forecast.

Clear, fine weather was bad as it made the ducks fly too high, I was told.

So, when I awoke on Saturday and saw not a cloud in the sky, I secretly felt a little relieved.

Still, as I drove towards Becks to see what the women got up to on what many were calling "duck day", I felt nervous for a friend's recently escaped pet duck, Maggie.

The women had gathered at the White Horse Hotel in Becks for a Mad Hatter's Tea Party, with duck-themed hats and fascinators and, of course, bubbly.

The women, who call themselves "duck-shooting widows", said they thought it was about time they, too, celebrated opening weekend.

Publican Karen George said the small country pub was packed on Friday night with about 150 people gearing up for the big weekend, as well as a film crew from Jam TV.

Some came from as far away as Australia and Auckland and for most, the weekend was like a reunion.

"It's like one big happy party. It's their one chance a year to catch up ... it's all about comradeship."

Sitting in the sun with the "widows" as they discussed plucking duties, listening to the occasional boom and echo of gunfire, I was almost swept away with duck day excitment.

Before long, though, I had to hit the road again for the second part of my assignment - catching up with shooters.

I met a group of men shooting on Geoff McAtamney's Satinburn farm near Lauder.

He said shooting was taking place on six ponds on the farm and as of late Saturday afternoon, eight hunters had bagged a total of about 120 birds.

As he talked, a lone duck approached his pond and the shooters' eyes lit up as they grabbed their duck-callers and decided who would take the shot.

As they blew their callers to lure the duck closer, black labrador Arrow stood to attention as the duck swerved towards us.

The gun boomed, my ears rang and I forced myself to look - the duck was flying away.

"If that was lead shot, he would have had him," Fraser Reid, of Alexandra, said. "One lead shot is better than two steel shots."

The men all agreed. They wished they could still use lead shot.

They said it killed more ducks, whereas with steel, a lot of birds were injured and flew away to die in another paddock.

Soon afterwards, another duck landed on the pond.

The men scared it into the air (ducks are not allowed to be shot on the water) and one took a shot.

This time, as it flew away obviously injured, the men cursed and I, too, wished they had killed it.

They told me between half and three-quarters of the birds had escaped them that day, whether injured or not, but despite that they reckoned it had still been one of the better duck-shooting season opening days.