By Louise Scott and Jared Morgan
0 Comments
Traffic is likely to remain restricted to one lane near Cromwell for the next few days due to a slip looming over SH8 near the intersection with SH8B and the Deadman's Point Bridge.

Traffic is being controlled by Stop/Go manual traffic management.

NZ Transport Agency (NZTA) said this morning that sluicing work, involving helicopters with monsoon buckets dropping water on the slip, would continue and traffic would be stopped for up to 30 minutes at a time.

"This sluicing work will continue for the next few days at least until we are sure the hillside is again stable."

NZTA maintenance contract manager Mark Stewart said after dropping 150,000 litres of water to control and flush the landslip yesterday, helicopters and crew got to work again about 9.30am this morning. 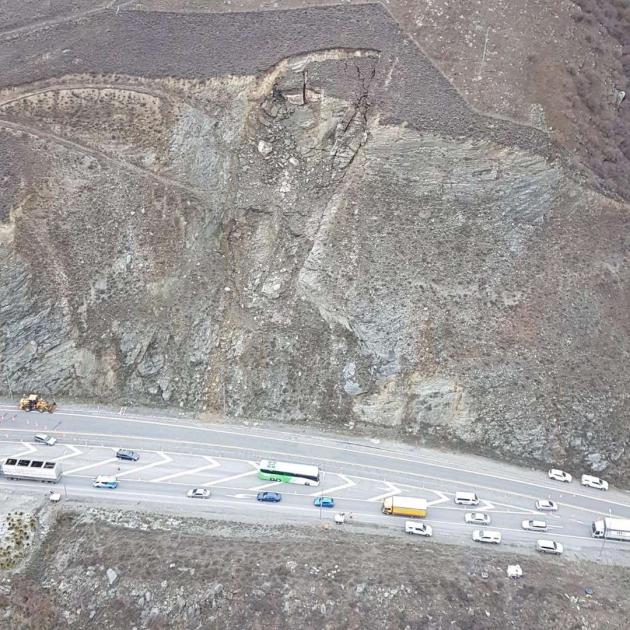 An aerial view of the slip causing delays near the entrance to Cromwell. Photo: NZTA
"The highway is likely to remain at single lane while this work is underway and we thank all road users for building in the extra time and being patient," he said.

The road remained open last night, with floodlights and close monitoring in place.

NZTA also issued an update shortly after 8am and advised motorists to expect significant delays when travelling along SH8 and SH8B.

The slip, which measured roughly 30m from top to bottom, 20m wide and 15m deep, was made up of schist, earth, tussock and other vegetation.

Mr Stewart said yesterday more than half a dozen crew and two helicopters tackled it - including road crews, engineers, a geotechnical adviser and traffic control using Stop/Go manual traffic management for about 100m in both directions from the intersection with SH8B. 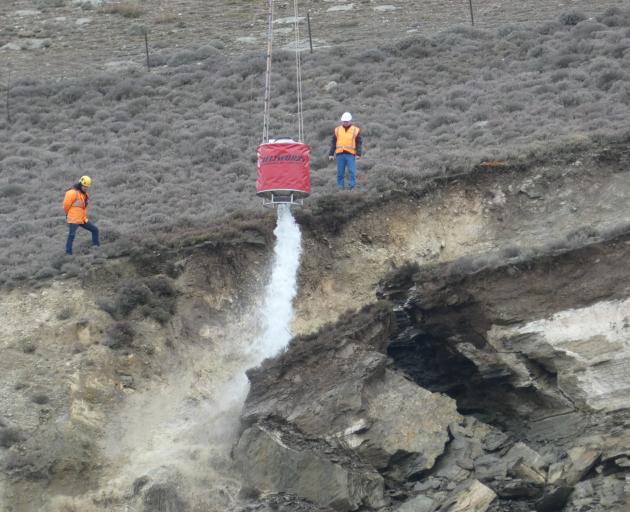 Engineers direct a helicopter monsoon bucket to wash out loosened rock debris from a slip above State Highway 8 near the intersection of State Highway 8B at Cromwell. PHOTO: JARED MORGAN
Plans to put staff on the slope were put on hold as it was "too unstable".

Early fears the road would close overnight did not eventuate but traffic was reduced to one lane in the immediate path of the slip with close monitoring, to protect road users.

Mr Stewart said options were limited as the slip was "actively moving" and too unstable for them to use other methods. 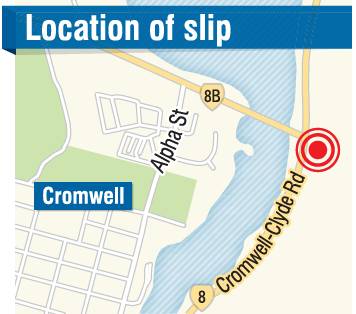 The Queenstown-based helicopters tackled the slip with monsoon buckets from about 1pm.

Each carried roughly 1000 litres of water — scooped up from Lake Dunstan downstream from the bridge.

All traffic was stopped for brief periods while the helicopters worked in rotation to sluice debris.

"They [the helicopters] use that water to drop on to the unstable slope ... the weight of the water and the movement of the water washes down all the loose material up there."

He described it as a "substantial" slip which had the capability of causing significant damage.

"I have calculated approximately 150,000 litres of water have been put on the slope."

The helicopters were stood down shortly before 4.30pm.

"If we were not able to get up there to do the sluicing because of fog - we would have closed the road.

"Rocks and small amounts of material were continuing to fall. That sluicing brings down all that material that is likely to fall into the line of traffic."

A woman across the lake from the slip told the Otago Daily Times she spotted it from her kitchen window early yesterday morning and said days of rain followed by "two good frosts" might have led to the earth moving.