The Kiwi Space Radar - built by California-based LeoLabs in Naseby in the past year - was opened yesterday in front of an international audience that heard New Zealand's space sector was growing rapidly in size and value.

New Zealand Space Agency leader Dr Peter Crabtree said many New Zealanders would be surprised to learn that New Zealand's ''high-value'' space industry had earned $1.8billion over the past year.

New Zealand was a global leader in small launch capability, last year having launched as many rockets as Russia and India, Dr Crabtree said. 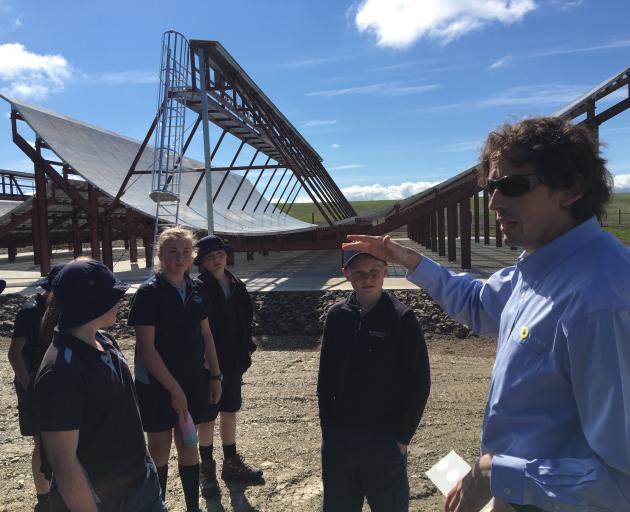 LeoLabs co-founder and chief technical officer Michael Nicolls talks to Maniototo school pupils at the opening of LeoLabs' Kiwi Space Radar in Naseby yesterday. Photo: Pam Jones
''They're much smaller rockets, but very high tech, and all of the satellites are shrinking, as capabilities are increasing.''

LeoLabs co-founder and chief executive Dan Ceperley predicted New Zealand would have the largest fleet of commercial satellites in the world within several years.

There were 1000 active satellites internationally today, but he predicted there would be about 15,000 within three to five years.

It was, therefore, vital to mitigate against space traffic collisions.

The Naseby radar would be able to track the 95% of space debris that was at present untracked, LeoLabs co-founder and chief technical officer Michael Nicolls said.

LeoLabs was planning to build another three radars internationally in the next
two years and would then decide whether it would build more or focus further on developing applications from the radar technology, Mr Nicolls said.

Mr Dowling, who is a fifth-generation Maniototo farmer, said it was great to be involved with people at the ''cutting edge of technology''.

It was ''kind of exciting'' to have the facility on his land, and ''the locals are finding it quite interesting'', he said.

''It's quite an off-the-wall sort of project, really, to have a space radar in the Maniototo.''