By Jared Morgan and John Lewis
0 Comments
The Manuherikia and Maniototo regions of Central Otago felt the full sting of a spring storm yesterday which brought heavy rain, snow and severe gales to the southern region.

Residents awoke to blanket of snow and motorists were warned to take care on State Highway 85 between Omakau and Kyeburn and in Moa Flat Rd, and Danseys Pass Rd was closed because of snow.

The depth of snowfall differed with about 10cm reported in Naseby and almost three times that in St Bathans.

There was also widespread snow on the hills throughout Central Otago and above Queenstown and Wanaka. 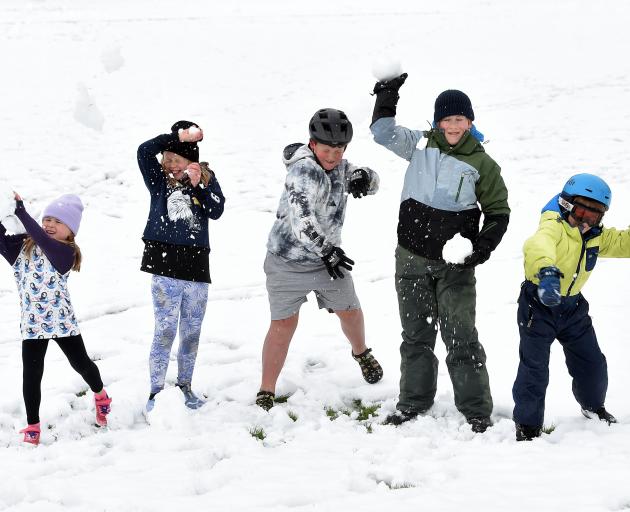 Having a snow fight on the Naseby Recreational Reserve yesterday are (from left) Macy Harmes (6), Freya Harmes (8), Arthur Divett (7), Liam Pettigrew (11) and Quinn Pettigrew (7), all of Dunedin. PHOTO: PETER MCINTOSH
What was potentially bad news for farmers at the tail end of lambing and calving was great news for the region’s children and those visiting the area for the school holidays.

Kyeburn woman Amie Pont said she woke to about 6cm of snow and that made an early morning drive a bit hairy.

‘‘I was travelling to Dunedin at 8am this morning and the Pigroot was covered but it was definitely a bit dangerous through the cutting.

While the bulk of the snow was gone by yesterday afternoon the MetService warned more was possible.

A MetService spokesman said a weather warning remained in place for the Lindis Pass last night (State Highway 8) with snow likely from 10pm through until this morning and 1cm or 2cm of snow could settle on the road above 800m, with lesser amounts to 600m.

The deep low that was forecast to affect New Zealand early this week would continue moving away to the east, while a strong, cold southwest flow over the country eased, he said.

Watches and warnings for heavy rain, heavy snow and severe gales associated with the low pressure system would still be in force for many places.

During tomorrow and Friday, a ridge of high pressure would move on to the country from the west.

This ridge would then move away to the east on Saturday, allowing a strengthening and moist northerly flow to develop over New Zealand.

However, severe weather was unlikely to be associated with this on Saturday, he said.