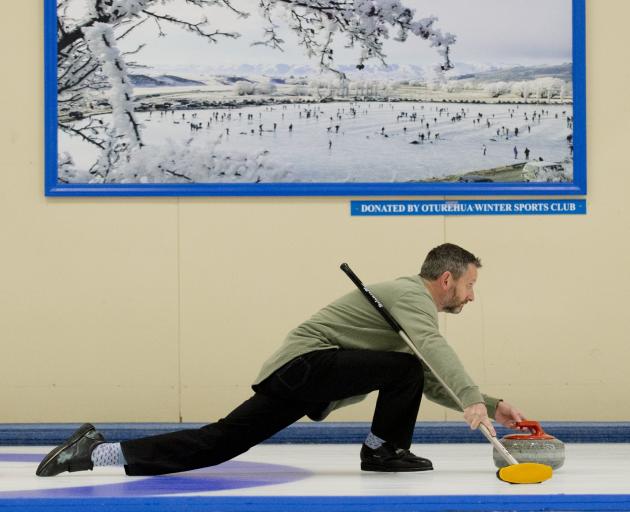 Kenny Thomson glides past a photograph of the 2001 Bonspiel at Idaburn during the national curling championships in Naseby yesterday. PHOTO: GERARD O’BRIEN
The sound of skippers yelling at sweepers and vice-versa are reverberating across the ice and richocheting off the walls at Naseby’s Maniototo Curling International rink this weekend.

The first stones were delivered in the New Zealand National Curling Championships on Thursday night. The competition ends tomorrow afternoon.

New Zealand Curling media manager Ian Ford said while the pace of the sport was not fast, its noise more than made up for it.

On day two of competition some teams had completed their round of games while some had only played one so far, he said.

In the women’s competition, things were "pretty tight".

The 47 competitors in the competition ranged in age from teenagers to people in their 60s, Mr Ford said.

"They are all pretty competitive but anyone can have a good game," the media manager said.

That meant the draw on day two of competition remained open, he observed.

As well as the cries across the ice there was also a lot of "friendly banter" going on.