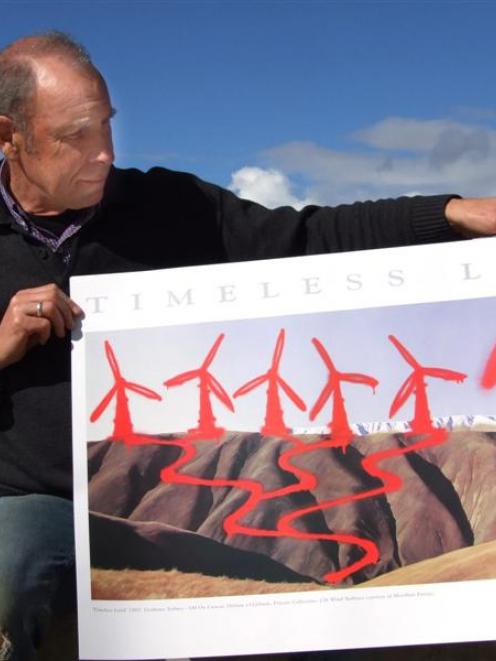 Grahame Sydney with his defaced copy of his well known painting A Timeless Land. Photo by Diane Brown.
Prints of a vandalised Grahame Sydney painting are proving lucrative for the Central Otago artist's umbrella group Save Central, as requests for signed copies mount.

Mr Sydney, who opposes the development of large-scale energy production within Central Otago, defaced a copy of his painting Timeless Land to draw attention to the group's national campaign.

He said about 98% of print orders were for signed and inscribed copies, each costing $50 including postage.

More than 300 orders have been made through Save Central's website for the 1000 limited prints, which depict blood-red wind turbines spray-painted over the Maniototo landscape.

Mr Sydney, who is Save Central's president, said the posters were a visual way for group supporters to engage in the debate against development on unspoiled land.

"Now that it [the campaign] has a graphic form, it is easier for people to sympathise or identify with it. The posters show how important visual power is, and that is very much the reason behind our anxiety about schemes which will have such a massive visual impact on the landscape," he said.

Save Central co-ordinator Graye Shattky said a constant stream of orders for the prints was being received through the group's website from people throughout New Zealand as well as overseas.

"The pace of sales has taken us by surprise. We are greatly encouraged by this response, which will further energise our battle to protect Central Otago's `World of Difference'," he said.

Mr Shattky said Save Central was "still a long way off" reaching the "very substantial funds" it needed for a variety of environmental causes opposing local subdivisions as well as wind and hydro development.

"Donations are never more welcome than now, but it does seem wrong that private citizens are required to find hundreds of thousands of dollars to protect national heritage, while our paid elected representatives sit on their hands and remain silent," he said.

Meridian Energy's proposed $1.5 billion Project Hayes wind farm on the Lammermoor Range was the focus of Save Central's public campaign until Environment Court judge Jon Jackson urged the group to stop including the project in media content while it was before the court.

An appeal hearing for the proposed 176-turbine development will resume in January.

Mr Shattky said Save Central's current publicity referred to the group's wider agenda and was not specific to Project Hayes, which was granted initial consent last year by the Central Otago District Council and Otago Regional Council.