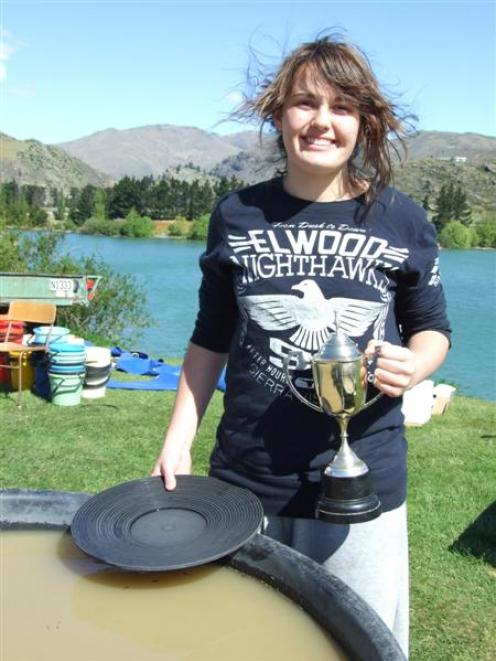 Amelia lined up in the final at Cromwell beside the category winners and the next three top panners from the day's competition.

Her father David was one of the finalists, as were defending champion Bill Lind, of Haast, who had won the event for three successive years, his brother Artie, of Timaru, and John May, of Ettrick, both former national champions.

Competitors were each given a bucket of soil "salted" with a certain number of gold flakes.

They had no idea how many pieces of gold were in the soil and had 10 minutes to pan it, retrieving as many flakes as they could.

The time taken played a part in their overall mark, but finding all the flakes was crucial as a five-minute penalty was given for every flake they did not retrieve.

Amelia was surprised to take top honours, although she hoped she might do well when she realised she had found more flakes than most of the finalists.

Her prize includes the right to represent New Zealand at the Australasia Goldpanning Championships in Ballarat, Australia, in March 2012, and $1000 to go towards her expenses.

Organising committee member Margaret May, of Ettrick, said Amelia was the youngest national winner in the 19-year history of the event.

"It's been a long time coming.

We've never had anyone from the under-16 category being the overall winner before but she'll do us proud in the Australasian championship," Mrs May said.

She has been gold-panning for about six years, starting when her parents David and Amanda took up the pastime.

"The best thing about it is the feeling you get when you see one of the gold specks in your pan."

Although she has not been "training" for the competition, the family occasionally panned in the Arrow or Shotover Rivers.

Technique, skill and the kind of pan used determined the end result, she said.

Amelia had little time to celebrate her victory - she had to catch a bus to head back to Dunedin, where she attends Columba College.

The championships are run by the Otago Goldfields Heritage Trust and this year attracted more than 40 entries.

Mr Chisnall was runner-up in the national championship and Artie Lind (Timaru) was third.