The historic Dunstan House hotel in Clyde’s heritage area has both a storied past and a firm presence in today’s popular culture.

Owners Ian and Meredith Kerrisk, who have listed the property for sale, look forward to what new owners will do in the grade 2 heritage-listed building’s future.

A pub had been on site since gold was first discovered in the region, Mr Kerrisk said, starting with just a tent catering to the miners before a large wooden hotel was built in 1863.

The hotel was the booking office and stop for Cobb & Co coaches and contained two bars downstairs, one for the miners and one for the mine owners, where they would host and receive reports from their mine managers, with a ladies’ parlour upstairs along with accommodation for upper-class guests.

About 1898, the wooden building burned down, leaving only the stone cellar, and rebuilding began almost immediately, Mr Kerrisk said.

This time, the construction used schist quarried from nearby Earnscleugh, creating a building that has stood the test of time. 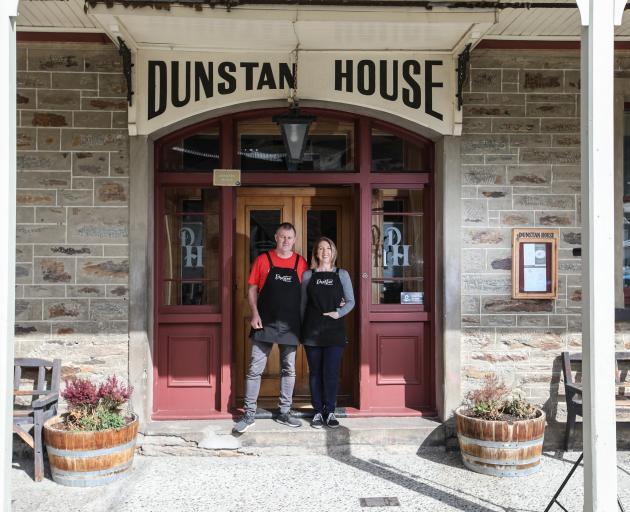 Dunstan House owners Ian and Meredith Kerrisk love that the property has become a stopping place for locals and visitors. PHOTO: SUPPLIED

Early photos showed just one small balcony, but that was extended to cover the entire frontage and give the women a place to relax while still under shade.

The cellar had its own stories, the grated entrance to the street not only used for liquor deliveries but as a way for the dancing girls of the gold rush days to make a grand entrance.

They would slip in from the street then emerge from a trapdoor in the middle of the miners’ bar to entertain the miners, and lighten them of some of their gold, Mr Kerrisk said.

More recently, the hotel has appeared regularly on television screens as the exterior of the pub featured on locally filmed series Under the Vines.

Mrs Kerrisk said the cast and crew were fabulous to work with and it was wonderful to see Dunstan House on the screen.

"You forget it’s an iconic building because you are just here working, then you see it on TV and remember how amazing it is."

Mrs Kerrisk (nee Clydesdale) grew up in Clyde and said she walked past the Dunstan House every day as a young girl.

The property was a private residence in those days, and it was not until five years ago, when the property went on the market, that the Kerrisks first set foot inside the historic hotel.

"We fell in love with it," Mrs Kerrisk said.

"It was that simple."

The couple then had two weeks to come up with a plan for their first business and arrange financing to buy the hotel.

It was a five-year plan with an exit strategy, and those five years were now up, Mrs Kerrisk said.

With Mr Kerrisk about to turn 60, daughters in Dunedin and Invercargill and a 3-month-old grandchild to spend time with, the couple looked forward to the next evolution of the grand hotel.

"Luckily for us, the previous owners did all the spadework and earthquake-proofed the building," Mrs Kerrisk said.

The couple renovated all the rooms (which are all named for local identities and people important to the town or hotel), started a cafe and opened the accommodation year-round, rather than just catering for the summer cycling trade.

"We have lots of people who have been here and done the rail trail but had no time to look around and they come back and stay again and spend a bit of time." Mrs Kerrisk said.

"It’s amazing the people who see the doors open and the cafe open and just have to come in and have a look," her husband added.

That included locals who, like her as a girl, had never stepped inside the doors of Dunstan House.

The couple said they had retained a friendship with the previous owners, who were interested to see what the they had done with hotel, and they looked forward to seeing what the future would hold.

"The next people who come in will put their mark on it and take it further," Mr Kerrisk said.

"That’s what it’s all about — we’re only custodians."