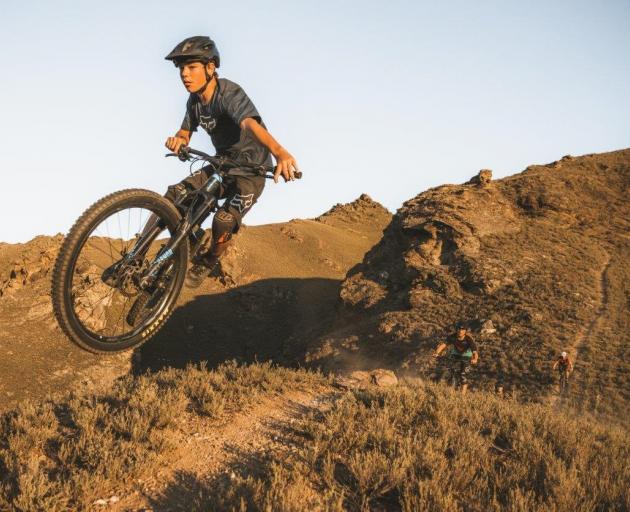 Alexandra mountain biker Cooper Millwood rides at Matangi Station, near Alexandra, which is one of the sites chosen for the South Island stage of the world-renowned Crankworx event. PHOTO: WILL NELSON/TOURISM CENTRAL OTAGO
Otago's mountain bike trails will be showcased later this year as an international mountain biking event makes its way across the region.

The world-renowned Crankworx yesterday announced the addition of a summer series festival to be held across the Central Otago and Queenstown Lakes districts.

There, riders will compete in a downhill at the Queenstown Mountain Bike Park and a pump track event at a yet-to-be-announced location on December 4-5. The latter will be broadcast live on the internet.

Next, riders will head to Cardrona Alpine Resort for an air downhill on December 9, and then finish the summer series at Bike Glendhu, Wanaka, on December 11-12, also being broadcast live.

Funding support from the Central Otago District Council, the Southern Lakes Event Investment Panel, and the regional tourism organisations of Queenstown and Wanaka, helped secure the event this year, and support has been offered in principle to secure the event for 2022 and 2023.

Crankworx Rotorua attracted more than 47,000 on-site visitors in 2020 and just under 700,000 viewers tuned in worldwide to watch the live action from afar, she said.

"When the combined exposure of all media, social, production efforts is combined, the global reach of this event is staggering."

Tourism Central Otago committed $50,000 to support the 2021 event, as part of its destination promotion role, while the CODC granted another $10,000 to support event costs this year.

Councillors agreed to support the event for 2021 and in principle for the next two years at a council meeting in August and the decision was withheld due to commercial sensitivity until event organisers could confirm all necessary elements to run the events.

Kiwi pro Keegan Wright says he was "super-stoked" to be heading south.

Athletes can register from September 20.

That is the type of tourism news Central Otago needs. I note that motorbike clubs are submitting to council concerned that they are not included in the proposed plan for Matangi Station. I sincerely hope that they are excluded. If you are exercising on a horse, mountainbike or are walking around the station, the last thing you need are noisy motorbikes which are also much heavier on the ground.