The project, a proposed ‘‘data centre’’ to be built near the Clyde Dam, is backed by Contact Energy.

Contact, and its subsidiary Simply Energy, announced yesterday they had an agreement to supply 10MW of renewable electricity for the data centre being developed by United Kingdom company Lake Parime.

Contact chief executive Mike Fuge said the project was in line with Contact’s target of securing more than 300MW of market-backed demand in the lower South Island, as it reduced its reliance on the Tiwai Point aluminium smelter, expected to close at the end of 2024.

‘‘It’s something new and something quite exciting, and shows the assets we have in the district are more than fantastic scenery, great people, wine grapes and great produce,’’ Mr Cadogan said. 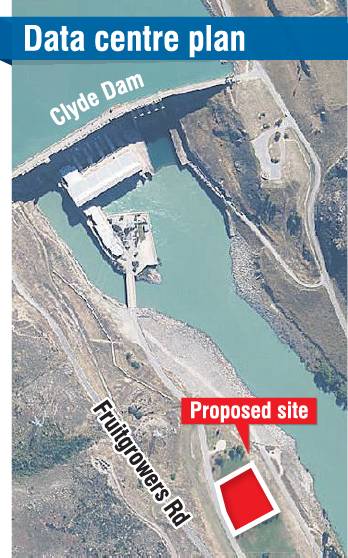 University of Otago computer science professor Brendan McCane said having a data centre in New Zealand could be valuable for the overseas company for a variety of reasons, including how data could be used under local regulations.

A Contact spokeswoman said the data centre could be used for industrial-scale data processing and high-performance computing applications, such as machine learning, weather models or data visualisations.

It would be built on land owned by Contact and leased to Lake Parime.

The structure itself would be owned by Lake Parime, she said.

The proposed structure, in Fruitgrowers Rd, would consist of eight containerised units that were each 3m high, 12m long, and 2.5m wide.

A noise mitigation wall 3.5m tall would be erected along the site boundary facing the river and south side to deflect any noise from the Clyde township and neighbours to the south.

Local contractors would be used and once operational the data centre would provide a small number of highly skilled jobs.

The Clyde community would also benefit from upgrades to the existing substation with a shared cost structure, resulting in lower lines charges, she said.

Following consultation with neighbours, a resource consent application was lodged with the CODC, which included a range of proposals to reduce any impact on the area, Mr Dyer said.

Lake Parime was contacted to comment on this story.