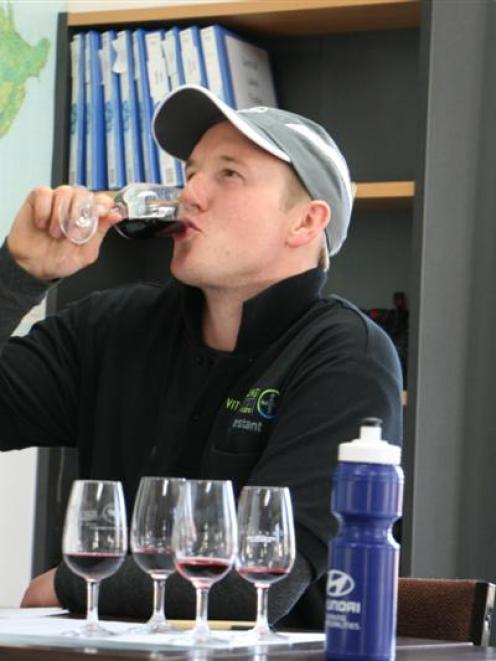 Mike Winter, of Cromwell, during the wine tasting section of a young viticulturist competition on Friday. Photo by Liam Cavanagh.
For Central Otago's Young Viticulturist of the Year 2015 winner, having a glass of wine at the dinner table from the age of 10 was normal in his family.

Mike Winter (28), of Cromwell, won the competition held at the Otago Polytechnic campus on Friday and Saturday.

Although it ''never really tasted fantastic'' at that age, that was the time he was introduced to the world of wine and viticulture.

Originally from Christchurch, he cut his teeth at Muddy Water winery in Canterbury after graduating from Lincoln University, and now works for Amisfield winery. A mix of the Central Otago environment, seasons, lifestyle, and people were the highlights of the job, he said.

And watching the grapes grow right through to seeing the wine being poured into a glass in a restaurant was ''fantastic''.

But this time around it was not easy for the defending champion, who said the lead up was ''pretty nerve racking'' as the other contestants had been ''snapping at my heels''.

On Saturday night, he delivered a three minute speech on the future of low alcohol wine in New Zealand at a prizegiving and dinner, before being judged the winner.

He won $1000 and a year long lease of a new SUV, but said the cash would probably get ''absorbed'' by wedding costs when he and his fiancée got married in January next year.