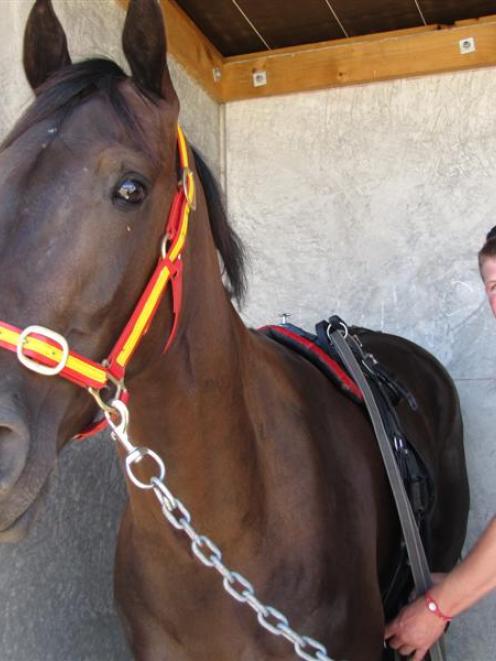 Mr Gorman, a stablehand at Hamish Hunter Stables, in Ryal Bush, had recently got his junior driving licence, meaning he could drive in the races.

Yesterday was his fourth race since getting his licence.

During race 6, two before his 5pm race, Mr Gorman began to prepare Curragh Abbey by "gearing him up" and "getting the cart on". After race 7, the two headed out to the birdcage for official inspection by the stipendiary stewards and then on to the track for a 10-minute warm-up before lining up for their race.

Curragh Abbey, just like Mr Gorman, was relatively new to the racing scene with only four starts but had come third in two of them, one at Omakau last week. Yesterday, the pair came second after racing 1800m against nine other horses. He said both he and the horse were "pretty laid back" and did not get nervous before races.

There were 12 races in total, a mixture of 2600m and 1800m, at the Wyndham Harness Racing Club's New Year meet at the Cromwell racecourse. It was the final meeting in the Interislander Summer Festival harness race series in Central Otago and temperatures in the high 20s and a light breeze sent punters looking for shade or queuing for ice creams and cold drinks.

Many enjoyed picnics from their car boots and judges who circulated determined which group had the "yummiest food selection". Other competitions included Fashion in the Field, and for the children the moonhopper race and sack race.

At 4.30pm, Southern Harness Racing promotions officer Lindsay Beer said 2000 people had arrived but he expected more as the last race was not until 7pm.