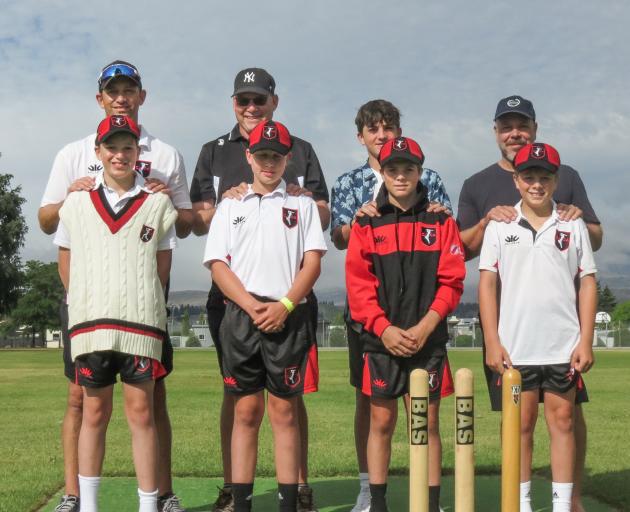 Sharing family ties to cricket are (from left) Shane Bond and son Ryan (13), Andrew Boyle and son Max (13), Felix (15) and Archie Huston (13), and Chris Hair and son Spencer (12). PHOTO: TRACIE BARRETT
One of 14 teams competing in the South Island primary schools cricket tournament in Alexandra this week arrived with a secret weapon.

Former Black Cap Shane Bond, who is currently assistant coach for the Mumbai Indians, is coaching Christchurch Black, in which his son Ryan plays.

Mr Bond played in the South Island primary schools tournament in Christchurch in 1989 and said he obviously wanted to watch Ryan play, and enjoyed the involvement of working with the team.

"I know the parents, I know the boys, and it’s really nice to come and coach in a tournament I played in," he said.

Ryan said he felt no pressure to take up cricket because of his dad, who played for New Zealand from 2001 to 2010.

"I just play because I love it," he said.

Ryan is not the only player on the team with family connections to cricket.

Among his teammates, Max Boyle’s father, Andrew, and uncles, Justin and David, are former tournament players, Spencer Hair’s father, Chris, competed in Alexandra in 1986, and Archie Huston is following in the cricketing footsteps of older brother, Felix, whose team won the tournament in Westport in 2020.

Mr Boyle said his brother, Justin, played in the tournament 50 years ago, in Ashburton.

Felix and Archie’s mother, Sophie Huston, said her great-grandfather Jack Scandrett was a keen cricketer who played for Southland "back in the day".

Current players echoed Ryan saying they played for the love of the sport and sharing that passion with their friends. The fathers said they were proud to watch their sons play.