Close race for mayoralty of Clutha 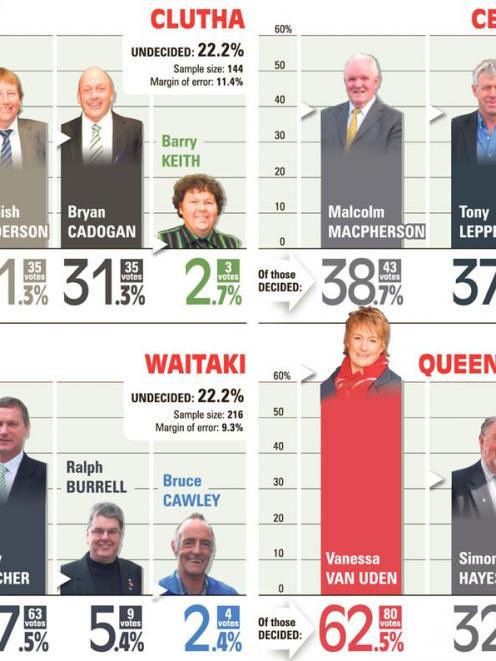 Districts' Mayoral Polls. ODT graphic.
Incumbent Clutha Mayor Juno Hayes has a real fight on his hands to retain South Otago's top job for a fifth consecutive term, with two of three rivals hot on his heels in the election race.

An Otago Daily Times poll of voters this week shows Mr Hayes ahead with 34.8% of decided voters, with Hamish Anderson and Bryan Cadogan tied for second on 31.3%. Political novice Barry Keith is on 2.7%.

Mr Hayes said he knew the race would be "pretty close", but described the poll as "comforting".

He believed there would be a higher voter turnout than in previous years and the election came down to "big picture stuff".

His deputy, Mr Anderson, was "not surprised" Mr Hayes was in the lead as "the incumbent always tends to have an advantage", he said.

"It's obviously a very close race and a wee bit of vote-splitting may be going on."

However, there was a "fair way to go" in the election process with about 38.7% of voting papers returned.

"I guess the true poll will be on the 9th of October."

Mr Cadogan was "excited" by the poll and was pleased his message was getting out there.

"I'm pretty chuffed with that; I'm in there and swinging," he said.

He may have been late to put his name forward for mayor, but he had "no tactical reason to put my name forward early", and believed all three of the top polling candidates were splitting each other's votes.

Mr Keith, on the other hand, questioned if the poll was relevant because he represented the "unspoken voice".

Cr van Uden said she was "delighted" but also mindful of a small sample size.

"There's a week to go; let's not count our chickens until the day."

However, she said she had received plenty of support and positive feedback from the community and described her campaigning as "fun".

"I've put a lot of work in and so have the other candidates ... I've really enjoyed it; you get to meet lots of people."

While some issues, like the level of rates, council spending and debt, had been of most concern to voters, other issues, such as a reticulated water and sewerage system in Kingston, as well as concerns about water in both Hawea and Luggate, had also emerged.

Mr Scott said while he was "hoping to do a lot better than I'm doing now", there was still a week to go and he was optimistic he could pick up some more votes.

"I think I've got a lot more to offer than people realise. But if that's the way it goes ... I've given it my best shot."

Mr Hayes is holidaying overseas and could not be contacted.


Central Otago
Mayor Malcolm Macpherson says he is not taking next week's election result for granted after the poll showed the mayoral race was "closer than expected".

"Most people who are going to vote probably have," Dr Macpherson said.

"It's been a pretty visible campaign so there's probably not a lot of point in putting a lot of effort into the campaign now.

"Those who are intending to vote will have pretty much made their minds up."

However, just over 40% of people contacted were undecided, and Mr Lepper said those voters would probably decide the election.

"It's going to be a big push in the last week to make up for the undecided votes, and it's essential that people vote because it's part of democracy."

He said the figures showed that people overwhelmingly wanted change, but voters would have to careful to not split the vote between himself and Mr Hill.

Mr Hill said only the people who wanted to vote would do so, and the ones that did were "lucky that I gave them a real option".

"People do not care," Mr Hill said of the undecided voters.

"They do not realise that hundreds of years or so ago, people gave their lives to vote, and they think that someone else will do it for them."


Waitaki
Mayor Alex Familton is taking nothing for granted, despite appearing to have a healthy lead over his deputy, Gary Kircher, in the four-way race for the mayoralty.

Mr Kircher felt the poll results did not reflect the feedback he was getting while campaigning and the race was closer than indicated, while Mr Burrell said it appeared people were "quite happy with the status quo".

Mr Cawley is not discouraged, even though also finishing last in his previous three consecutive mayoralty attempts, and said yesterday: "A good old nag may come last in all the races, but it might win one, too."

Mr Familton had found people accepted there had been "firm and fair leadership" over the past three years and the district had worked together as a team.

That was reflected in feedback during campaigning and in the poll results.

But he still planned to continue with the same level of campaigning, including door-knocking and meeting groups.

Mr Kircher said the big number of undecideds meant people had yet to get out and vote.

"If they want change, they need to vote for me, not the other candidates," he said, referring to the lowest polling Mr Burrell and Mr Cawley.

The poll result did not reflect the feedback he was getting after "knocking on hundreds of doors".

Mr Burrell said he had had "next to nothing" feedback on the election, apart from the people he normally talked to.

"There's either a lot of apathy - or they're thinking. I don't think they are thinking."