Confusion in South as Covid-19 test swabs refused by labs 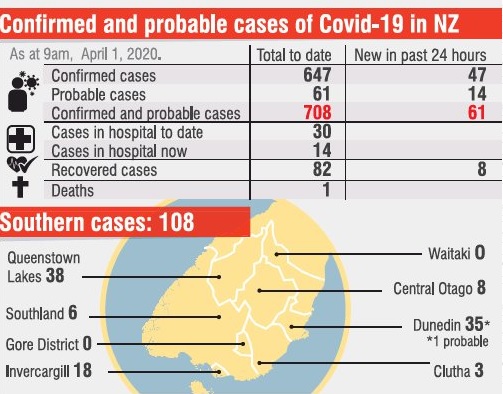 Southern GPs say they want greater clarity around a probable increased level of testing for the Covid-19 coronavirus, and qualifying criteria for patients.

GPs contacted by the Otago Daily Times yesterday said changing governmental criteria defining who could be tested had led to troubling confusion including test material being refused. This was because up to 50% of swabs were being rejected by laboratories for failing to meet the latest guidelines.

New testing criteria were released late on Wednesday, meaning those with symptoms but no connection to overseas travel or another coronavirus case could be tested.

"We’ve probably had about 50% of our swabs declined by the lab, because they didn’t fit governmental case-definition criteria at that time.

"The problem seems to be a disconnect between the information provided at public briefings, and whatever’s filtering down to the labs.

"Having taken the swab, it seems pointless not to test it if the capacity is there."

Yesterday, the Southern DHB said it averaged 199 tests a day during the past week.

On Wednesday, 333 tests were performed, and capacity was now 450 tests a day.

Nationally more than 4000 tests can be processed a day, and more than 26,000 have been completed.

Dr Pettigrew said that increase was reflected in his experience at the surgery yesterday.

"Potentially now the floodgates will open. We’ve certainly seen a big increase in requests today, and we’d expect those to be processed fully."

Despite reports from other regions of test kit shortages, that did not seem to be an issue in the South.

However, Dr White expressed concerns about the lack of clarity concerning qualifying test criteria, and was worried by shortages of some Personal Protective Equipment (PPE).

He had not seen any lift in test requests since Wednesday’s announcement, which he put down to Cromwell’s few cases.

Of greater concern to him was the "horrific" potential for the virus to "shut down" health facilities by spreading among essential medical staff, he said.

Quote-"The problem seems to be a disconnect between the information provided at public briefings, and whatever’s filtering down to the labs."

Oh for crying out loud, really? In this day and age, with all the direct means of digital communication available?
Here's and idea, how about those making the policy changes communicate directly with the labs and testing providers immediately and directly. You lot really need to be reading from the same song sheet.
We're asked to take this seriously, yet we see one systemic failure after the next, while all our lives are on hold.
No wonder there is so much confusion out there, who's running this? Mickey Mouse or Goofy? Where's the Minister of Health on this? Can we remain confident all and everything possible is being done?

Minister of Health is out mountain biking Sir !