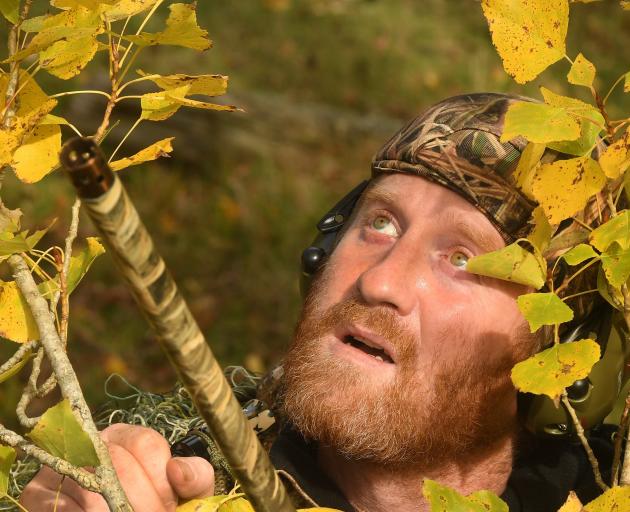 Duck-shooter Tim Cossens will be looking to the skies for his next meal when the season starts today. PHOTO: STEPHEN JAQUIERY
Steaming duck breast with caramelised chicory, creamy potato dauphinoise and a red wine jus, or a spicy duck kielbasa pizza?

This morning, soon after the 2021 duck-shooting season starts, conversation for Tim Cossens and his shooting buddies will invariably turn to the best recipes to use for their opening weekend catch.

It sounds like an unlikely topic for blokes in a freezing mai mai, but Mr Cossens said he often dreamed about duck cuisine while sitting out there in the cold mud and rain.

While they did not profess to be Michelin Star chefs, their standards were high, he said.

"We turn them into prosciutto, we turn them into stir-fries, duck nuggets — my buddy is a bit of a meat connoisseur and he can turn them into spicy kielbasa (like a chorizo) and all sorts of gourmet sausages with venison and goose and mallard and even rabbit.

"The ducks that we harvest go to good use.

"Knowing that at the end of the day, you’re going to be able to take home some beautiful kai for your whanau and feed a whole heap of people — that’s a good feeling.

"Especially in this day and age when we eat a lot of processed food and preservatives, so to be able to go out and harvest nature’s bounty is at the core of it."

However, the weather forecast for this weekend is not optimal for duck-shooting.

MetService is forecasting mostly sunny weather and temperatures reaching the mid-teens around Otago and Southland.

Shooters prefer low cloud and wind to keep the birds flying low and on the move.

New Zealand Police have again reminded duck-shooters to be vigilant about safety.

Acting Superintendent Mike McIlraith encouraged everyone heading out this season to refresh themselves on the seven rules of firearm safety: treat every firearm as loaded; always point firearms in a safe direction; load a firearm only when ready to fire; identify your target beyond all doubt; check your firing zone; store firearms and ammunition safely; and avoid alcohol and drugs when handling firearms.

"It’s also a really good idea to make sure you’re familiar with your firearm and have checked it to ensure it’s working correctly, especially if it’s been in secure storage since last season.

"We want safety to be your focus this duck-shooting season, so you and your mates have a safe and successful season."