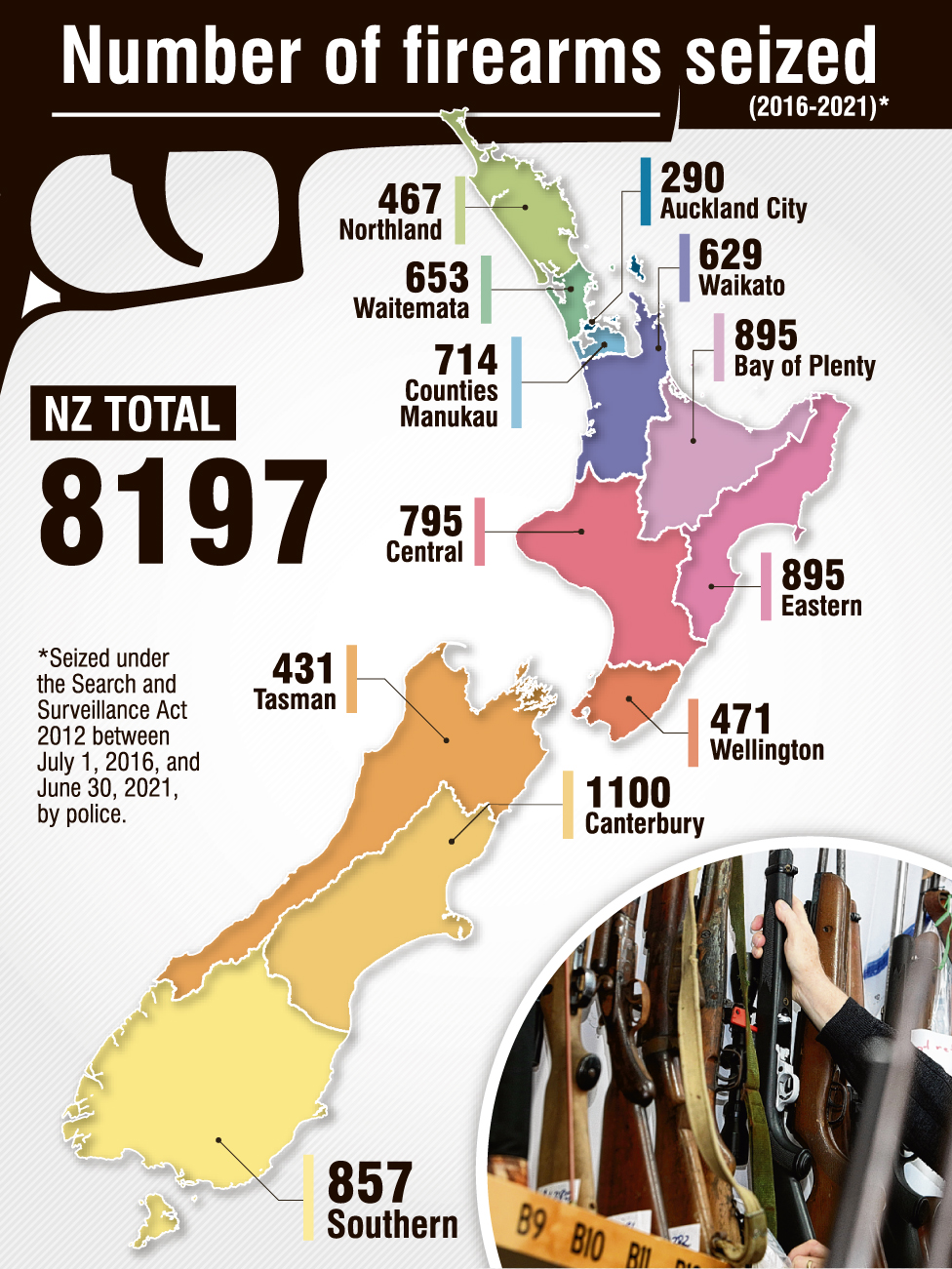 The South has one of the highest rates of illegal-gun seizures in the country, and an increasing gang presence is being blamed.

In the past five years, Southern police have seized 857 illegal guns, information released to the Otago Daily Times shows.

It is the third highest total in the country, behind only Canterbury on 1100, and Bay of Plenty and Eastern, which both seized 895 guns.

The new figures come as police raise increasing concerns about organised crime and a proliferation of gun violence.

With that growth came a corresponding upsurge in the presence of illegal firearms, he said.

"Disturbingly, gangs are now more prepared than ever to use these firearms against police, their rivals, and the public.

"At one time it was a perceived threat amongst our membership, now it’s the reality, and alarmingly reflective of the increasingly dangerous environment police operate in."

He believed Operation Tauwhiro, a national operation targeting gun violence, had contributed to the high number of guns seized.

"Deployment of specialist groups such as AOS in Southland also increased, with intermittent monthly spikes in demand linked to gang activities, such as armed standovers, and rival tensions.

"Disturbingly but not surprisingly, illegal firearms were located in many of these incidents."

It was positive that so many guns were being taken out of the hands of criminals, he said.

However, it was bittersweet.

"On one hand it demonstrates the benefits of our sustained focus on the firearms-related offending of Southern’s criminal gangs, and on the other it’s a stark reminder of the dangers that their proliferation presents to Southern police and our communities."

"As part of Operation Tauwhiro, police in Southern district are working to prevent firearms getting in the hands of criminals, which is good news for the safety of our community."

Auckland City seized the fewest guns over the past five years, 290.

Do you remember what was offered those people possessing illegal firearms during out $200 million dollar gun by back? Police offered them an amnesty. Just come drop off your guns we wont look, no money for you though of course. Up you come mr tweeker. Really how likely was that to happen? It was like they have had no experience with the criminal element before and expected compliance and honesty lol. How safe do you all feel on the streets now after $200 million dollars of your money was spent on that exercise? Most of it on running the scheme evidently. Someone got rich and we got this.

We have armed criminals, that's what we 'got'. Taking away guns is the best policy.

We still have armed criminals - how's that "Taking away guns is the best policy" working out for you?

The gun buyback has achieved nothing in terms of making NZ a safer place.

The high number of illegal gangs is an even bigger problem.

The single-biggest factor impacting on gangs, organised crime, and firearms-related offences .. is the return to NZ of the so-called 501’s, deported from Australia.
If Police had put the same amount of effort into successfully lobbying lawmakers and policy makers to deal well with that issue - as they did pursuing legitimate, law-abiding Firearms Licence Holders after the Chch Mosque Shooting .. we would quite simply not be seeing the escalation in the number of gangs, gang membership, organised crime, and firearms-related offences we are now seeing.
You didn’t have to be a rocket scientist .. what needed to happen is not hard to conceive .. the consequences we are now seeing were entirely foreseeable .. and now all New Zealander’s are witnessing .. and indeed paying the cost.
The Firearms Community did try and warn lawmakers they were focusing on .. indeed, pursuing .. the wrong people.
It was all so preventable .. it’s almost as if the senior management of NZ Police *wanted* it to happen?
People sometimes refer to the NZ Police as the biggest gang in NZ .. is there some truth in that?
Is gang proliferation .. with all of the associated problems .. “good for business”?