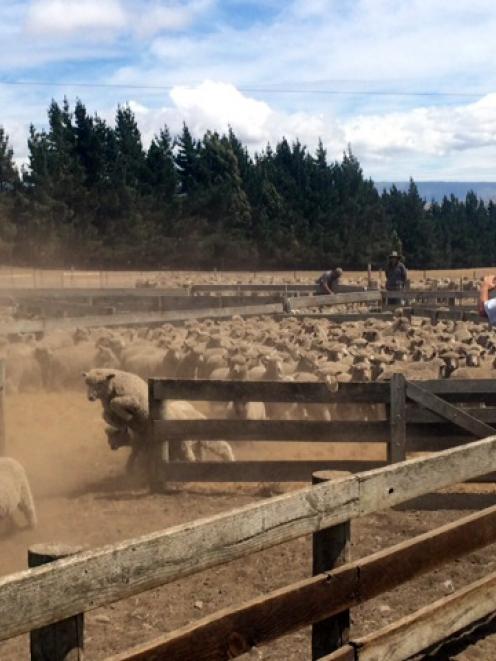 Lambs stir up dust in the yards at Stoneburn Station, inland from Palmerston yesterday, during an on-farm sale in which all 4500 lambs offered were sold. Photo by Rob Fowler.
Otago lambs are being sold to North Island farmers as arid conditions affect most of the South Island.

Rural Livestock Otago livestock manager Rob Fowler said it was the first time he had moved lambs across Cook Strait.

This week he arranged markets for 7000 Otago lambs in the North Island.

''They're going regularly,'' he said.

''We're running out of options as to where to send stock because Southland's getting a bit dry, as well. Canterbury outlets are non-existent because crop farmers haven't got their crops sold.

''Crop farmers usually have their crops coming off by now and they start buying lambs for early winter trade. But they are not ready for anything, so we're having to bypass them and go further north.''

Farmers across much of the region are selling livestock to preserve what feed they have and store stock, or stock not ready to be sold to meat companies, is saturating the market.

''The market started about $2.50 a kilo. Now it's bottomed out around $2 a kilo, live weight, just through the volume of lambs being traded.''

In December the Otago Daily Times reported a wet spring for southern farmers.

His Clydevale farm had been 55% wetter than the 45-year average.

In Central Otago, Cromwell and Lauder each recorded about three-quarters of normal annual rainfall last year.

''It came right, but then, of course, it stopped raining,'' he said.

''The issue now is that we really need rain in the next two weeks or we will be rapidly heading to what's happening in the rest of Otago.

''What could be problematic for us here is that there won't be many outlets for stock in the next few weeks, because so much has already been shifted out of Canterbury and North and Central Otago.''

PGG Wrightson's Gore livestock manager Mark Cuttance reported the market was trying in Southland as well, and a high volume of lambs were coming to stock sales.

The lamb market was depressed and saturated and in the last week prices had dropped $10 a head, he said. Rural Livestock stock agent for East Otago-Oamaru Gus Caldwell said this year would put an end to three or four ''remarkable'' years for sheep farming in the area.