Lock, stock and barrel in the South 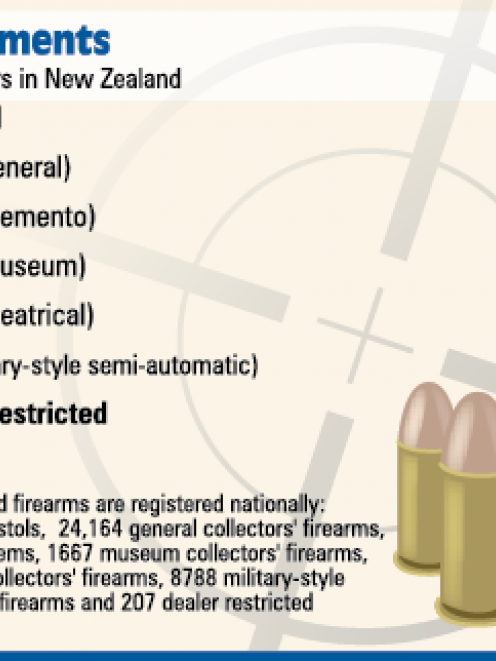 One in 10 people in the Southern police district holds a firearms licence.

That statistic is concerning or trivial, depending on how you feel about firearms. In the Southern district - the area of Otago and Southland - there are 32,454 standard firearms-licensed holders who own an unknown number of rifles and shotguns.

The number of licence holders in the area is second only to the Canterbury police district, where a population almost twice the size has 34,582 licence holders.

Why are firearms so popular in this part of the country?

''The hunting's good - it's accessible. There's plenty of areas that are accessible to go hunting ... and they are only two hours away from [the city].''

Otago and Southland offered the ''complete package'' for those who enjoyed the outdoors as there were also good fishing spots, he said.

The number of people based in rural areas and the associated culture also contributed to the numbers.

''Without a doubt it's [hunting] ingrained in the culture of New Zealand,'' he said.

''You go into Te Anau and the whole place down there has been built around hunting. It's a huge part of the culture in New Zealand and the way of life.''

Centrefire McCarthy's managing director Selwyn Shanks said the popularity of hunting was increasing as the cost of firearms came down.

''The prices have dropped enormously. You can buy a reasonable quality American-made centrefire rifle for about $650-$700 now.

''It's a lot more affordable than it would have been 10 years ago,'' Mr Shanks said.

Customers in his store ranged from young to old, once-a-year duck hunters to weekly sport hunters.

''The demographics are wide-ranging, from people from the age of 16 to people in their 80s,'' he said.

''A lot of them are sport shooters ... your diehards that go out every weekend.''

The range of weapons they bought was just as disparate, he said.

About a fifth of the firearms he sold were .22 calibre rifles, another fifth shotguns and about 50% were centrefire rifles, ranging from .223 to .308 in calibre.

Occasionally he sourced items for collectors, but ''a lot of those collections are done through auctions'', he said.

Statistics from police showed as of May last year there were 51,834 firearms owned by endorsement licence holders in New Zealand.

Endorsement licences cover special purpose and collector's firearms and each firearm has to be registered.

Those restrictions were part of the reason firearms-related deaths were uncommon in New Zealand, University of Otago dean of law Prof Mark Henaghan said.

He conceded ''that any gun is pretty scary to me'', but New Zealand's gun controls seemed to be effective.

''They are probably working, by and large,'' he said.

''Unfortunately, people who want to kill someone may be able to get a hold of a gun.''

But people were vetted by police and those with a protection order against them had their firearms removed by police.

''We have never seen it [firearms control] as a major issue in New Zealand,'' he said.

The country's situation was enviable compared with the United States, he said.

A report produced last year by the US Law Library of Congress showed the rate of deaths by firearms in New Zealand had decreased during the past 20 years. The report pointed to the reforms to firearms controls in 1992 - which came after the 1990 Aramoana massacre when David Gray killed 13 people - as one reason for the decline.

Accidental deaths and self-inflicted deaths from firearms were also declining, the report said.

''We have been noticing the deaths of hunters by hunters,'' he said.

''Anybody dying in the pursuit of their sport is one too many.

''Identifying your target is number one. Assume it's a human until 100% proven otherwise.''

The recent death of Adam Hill, who was shot while hunting in the Longwoods, in Western Southland, was a sobering reminder for all hunters of the importance of safety, he said.