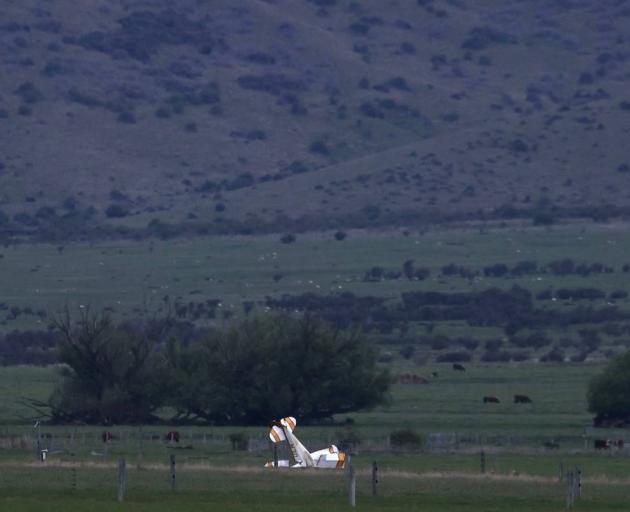 The plane crashed yesterday killing the pilot. Photo: George Heard
A man killed in a light plane crash near Lake Ōhau yesterday morning has been described as a "very experienced" and "widely respected" pilot.

The plane crashed in a paddock near Twizel-Omarama Rd (State Highway 8) at 10.46am yesterday.

Omarama Airfield chairman Clive Geddes said the pilot had taken off from the airfield on a solo flight yesterday morning.

He was a very experienced glider and microlight pilot, Mr Geddes said.

As well as working as a gliding instructor in New Zealand, the pilot had spent winters as an instructor in the northern hemisphere.

Police confirmed the man had been the sole occupant of the plane and said he was found dead at the scene.

Mr Geddes said there had been "nothing exceptional" in the weather conditions at the airfield yesterday morning.

A Civil Aviation Authority (CAA) spokesman said an investigation team was being sent to the site and was expected to arrive today.

Investigators would examine the crash scene and interview first responders and other witnesses.

Members of the public who witnessed the crash were encouraged to contact CAA, the spokesman said.

Waitaki District mayor Gary Kircher said the event was tragic and he had called to check in on acquaintances who flew when he heard the news.

There were a lot of people involved in aviation in the area, and the crash would affect a wide section of the community, he said.