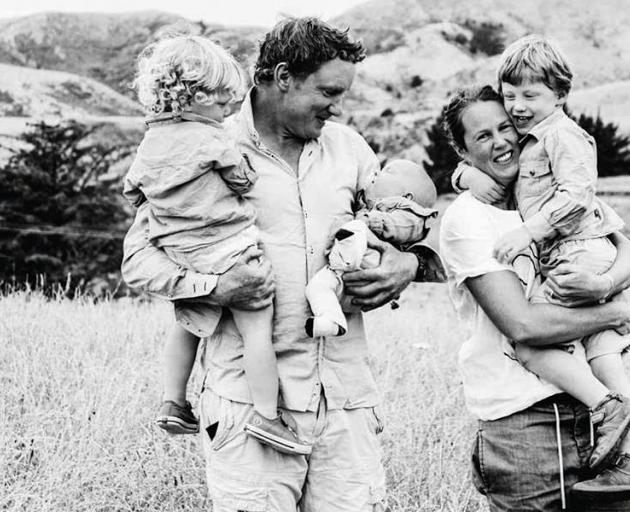 Gavin Dowling will be missed by wife Rosie Dowling, and children (from left) Digby (2), Olive (9 months) and Harry (4). Photo: Supplied
Nearly $250,000 has been raised in a week for the young family of a former Hyde man killed suddenly on the first day of lockdown.

Gavin Dowling died last Thursday in an unexplained event on the family farm in Ward,  Marlborough.

At the time, wife Rosie Dowling was at Starship Hospital in Auckland with nine-month-old baby Olive, who has Ebstein’s anomaly, a rare heart condition.

Olive is now in Wairau Hospital, and Mrs Dowling was dividing  her time during the Level 4 lockdown between the hospital and  her two other children.

The family had been unable to hold a funeral due to the lockdown.

Family friend Millie Volckman, who had been best friends with Mrs Dowling since they were 14,  said she wanted to do something to help in the wake of Mr Dowling’s death.

She had set up a Givealittle page, which had yesterday raised $246,000.

"We wanted to help out financially, so she doesn’t have to worry about the farm and finances for a few months and can just spend this time with her children, keeping memories alive and under standing this new way of living without her best mate Gav.

"The support from the community has been amazing," Mrs Volckman said.

"I knew people would support it because they are so loved in the community."

Mr Dowling grew up in Hyde and attended St Kevin’s College in Oamaru, before leaving to study  at Lincoln University.

Mrs Volckman described Mr Dowling as a hard worker and an "amazing father".

"He was counting down the days until he could coach his kids at rugby.

"Everything he did, he had his kids in mind."

The funds would be used for essential items, the running of the family’s two farms and a farewell for Mr Dowling after the lockdown, Mrs Volckham said.