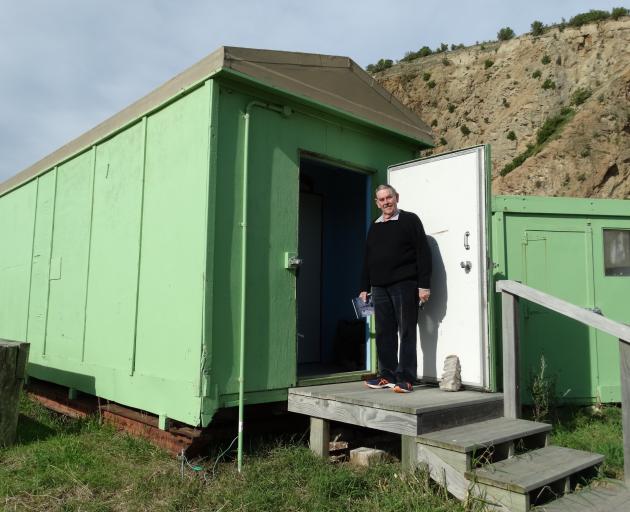 Oamaru Antarctic historian Dr David Harrowfield, pictured in 2017 outside one of the huts from the Antarctic that were recently relocated from Oamaru Harbour to Husky Base Camp, near Templeton in Canterbury. PHOTO: DANIEL BIRCHFIELD
Oamaru has lost one of its links to the Antarctic, after two huts once used on the frozen continent were recently relocated to a Canterbury township.

The first of the 50-to-60-year-old green wooden huts, brought to Oamaru in 2012 by the Oamaru Whitestone Civic Trust after discussions with Antarctica New Zealand, once accommodated Sir Edmund Hillary and was part of the town's commemorations to mark the 100th anniversary of the death of Captain Robert Falcon Scott the same year.

A second hut arrived in 2015. It was formerly used at Scott Base and McMurdo Station.

Until recently, both were on Waitaki District Council land at Oamaru Harbour.

Oamaru-based Antarctic historian Dr David Harrowfield, supported by sponsorship and donations, acted as caretaker for both of the small structures and, while disappointed to see them go, said the occasionally harsh environment at the harbour was not the most suitable place for them.

That was compounded by what he described as a lack of support from the council.

"The huts were failing fast by proximity to salt in the air and during storms, when spray off the south end of the breakwater affected the special paint, and lack of general maintenance in a maritime environment.

"Because there had already been much sponsored help, I was reluctant to again approach people who had given much time and resources.

"A particularly disappointing aspect was that at no stage had there been any approach from the reformed harbour committee or the council, the latter of which showed limited interest in the huts."

Earlier this month, the huts were taken by truck to Husky Base Camp, an Antarctic-themed tourism attraction near Templeton, where they would be displayed in an indoor setting.

Adventure Books owner Bill Nye, of Oamaru, is helping set up an exhibition to be held at the camp in the first week of October and together with owner of the camp, Michelle Attwood, will repair and maintain them.

Waitaki Mayor Gary Kircher said it was unfortunate Oamaru had lost the huts and in response to Dr Harrowfield's assertion the council did not show interest in them, said it had not been approached about the issue while the huts were in Oamaru.