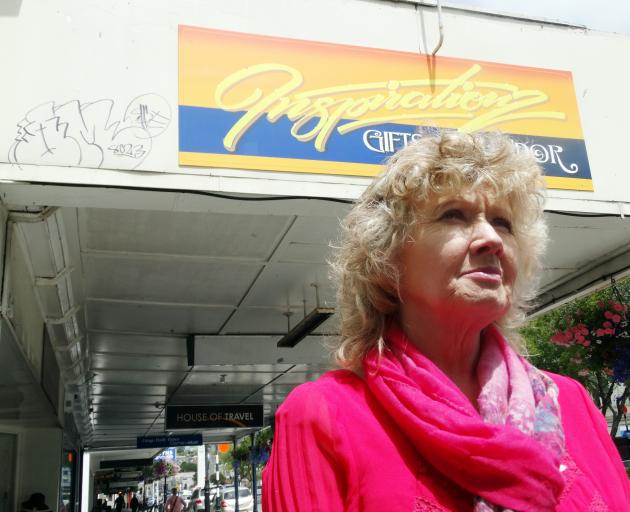 Several buildings in the area that houses Hope and Associates, BNZ, Empire Backpackers, Ray White Real Estate, Oamaru Library, Adore Spa and Golden Fox and Inspirationz have been targeted recently, as well as the vacant space next to the Allied Press office, a wall between Inspirationz and Farmers and the Kiwibank ATM machine outside Smart Buy.

In each case the graffiti, which appears to have been drawn with a thick black marker, was drawn in a similar style and at least two pieces feature the number 8023.

Inspirations owner Jan Nuttall said it was not the first time her business had been hit.

"It’s very frustrating because I have not long cleaned off the last lot. That would have been two months ago, I think."

After first trying to use methylated spirits and cream scourer to remove it, which she said "took ages", Ms Nuttall was forced to paint over it, which she suspected she would have to do again this time.

"The cost is not too major, but it’s just annoying having to do it."

She was concerned graffiti was a growing trend in Oamaru.

"It seems to be. It looks awful.

"They are not just targeting one area. It’s in other areas as well.

"What’s the solution? How would you catch them? You can’t stop it... it’s people that have nothing better to do."

Sergeant Blair Corlet, of Oamaru, said the graffiti was "very distinctive" and police would work to find the person or people responsible and hold them to account.

"If we get the opportunity to speak to the person involved they will be dealt with appropriately, whether it’s through the adult or youth justice system.

"It occurs from time to time and we encourage people to report it.

"I imagine it’s very frustrating for the business owner because it would cost them time and money to repair."

A Waitaki District Council spokeswoman said council staff were unable to respond to questions from the Otago Daily Times yesterday.

However, graffiti could be reported through the council website or by using its snap and solve mobile phone application.