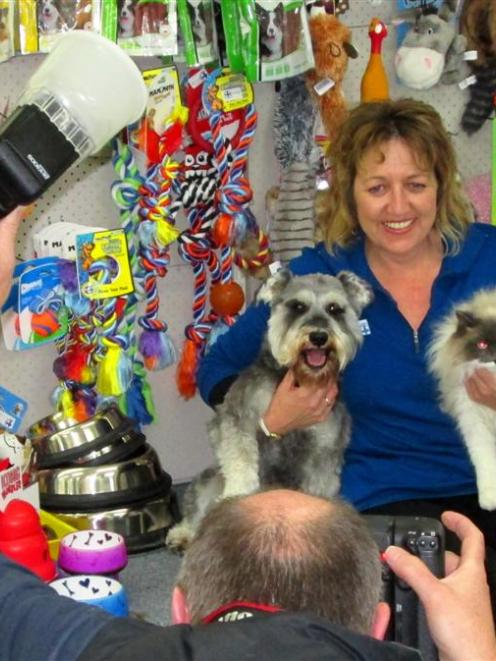 Chrissy Watherston, at the Veterinary Centre in Kurow, poses with dog Theo and cat Cocee for police photographer Craig McKirdy as part of a North Otago campaign opposing family violence. She will use ''Don't Fight Like Cats and Dogs'' as the centre's slogan. Photo by NZ Police.
A campaign against family violence set to be launched in North Otago has exceeded expectations as about 120 businesses have already signed up for it.

Based around the ''Family Violence - It's Not OK'' programme, the North Otago campaign echoes one launched recently on the West Coast.

North Otago businesses have been asked to put their faces to the campaign by having photographs of staff taken and creating a poster opposing violence to display with a slogan reflecting their businesses.

For example, Chrissy Watherston, at Kurow's Veterinary Centre, has been photographed with a cat and dog and has chosen ''Don't Fight Like Cats and Dogs'' as its slogan.

The campaign is being put together by Safer Waitaki and the Family Violence network with funds from ''It's Not OK''.

Waitaki community safety and development facilitator Helen Algar said the purpose was to raise community awareness about the reality of family violence and give a strong message that violence, in particular family violence, was not acceptable.

''We have utilised a wonderful initiative from the West Coast and I believe there are other communities undertaking a similar project.''

Training by It's Not OK senior adviser Stephanie Edmond was also being offered to businesses interested in becoming champions against family violence.

Senior Sergeant Jason McCoy was surprised by the number of businesses involved.

''We thought we would have maybe 20 or 30 businesses, but the response has been outstanding with over 120 businesses from Palmerston right up to Omarama signing up.

''It sends a strong message to us that our communities care about this issue and are willing to contribute to preventing family violence.''

The campaign will be launched later this year. Businesses can still register for it and the training by contacting Mrs Algar through the Waitaki District Council.