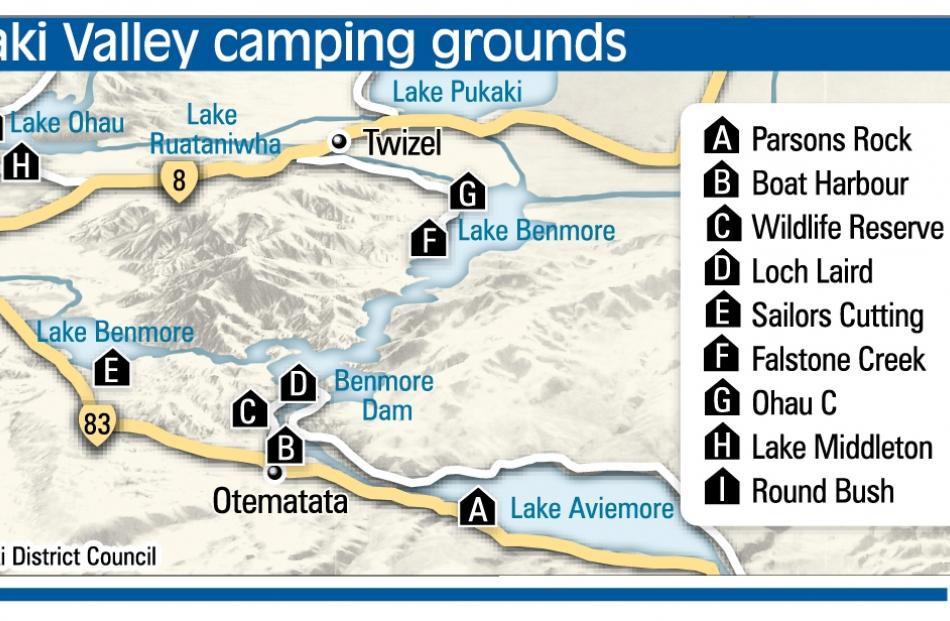 Thousands of campers who pour in to Waitaki lakes camp sites during summer face some major changes in management by the Waitaki District Council.

Most of the camps could be handed over to private operators under leases or contracts, but before any final decisions are made, people will be asked what they want.

That is likely to be contentious. Similar proposals in the past have caused consternation among some campers.

But they could also look at the Mackenzie District Council's Haldon Arm Camp, which is administered by the Haldon Arm Reserve Trust Board, made up of campers.

The Waitaki council wants to withdraw from managing the camps it operates on Lakes Aviemore, Benmore and Ohau and has produced a ''camp ground future management review'' by consultant dm Property Solutions.

It is a draft document which will go out for public consultation, then be included in the council's long-term plan next year, which will be subject to further consultation.

No changes will take place this season, but could start from the 2015-16 season.

The review came up at the council's community services committee last week, which started the process towards consultation.

Cr Jim Hopkins said the review presented a lot of options, but the outcome had not been predetermined.

Waitaki Mayor Gary Kircher acknowledges there are some economic benefits to the area from campers, but questions why Waitaki's ratepayers should continue to subsidise the camps.

He believes that, with the right private operators, facilities and service to campers can be improved without ratepayers' input.

Chief executive Michael Ross said camps ''cost ratepayers quite a bit of money'', and he could not see why they should subsidise campers who came from outside the Waitaki district.

Other councillors took care to emphasise the review was a draft and any decisions would be subject to public input.

The committee adopted the review's recommendations that it lease out or enter into long-term management contracts for the Parsons Rock, Otematata Boat Harbour, Otematata Wildlife Reserve, Loch Laird, Sailor's Cutting and Falstone camps.

It also recommended the management licence held by Cairn Station for Ohau C camp be reviewed and the council divest the Lake Middleton camp back to the Crown, subject to discussions with Waitaki Boys' High School, which has a lodge there.

Round Bush camp at Lake Ohau, which was administered by the council, was handed back to the Crown last year.

While the camps have basic facilities, some campers set up elaborate family or group compounds on a site they have occupied for decades.

They go up the night before camps open, to ensure they get their traditional spot and their have been disputes if others beat them to it.

The review followed a decision by the council in April, 2011, to ''substantially withdraw from the active management of camping grounds in the Waitaki district''.

In addition, there were some specific issues relating to individual camps, including the deterioration of the Sailor's Cutting boat ramp, Waitaki Boys' lease at Lake Ohau for its outdoor education lodge, the future of the Ohau C camp and land ownership and water supply easement at Falstone.

Each camp was then assessed looking at who received the benefits and who bore the costs.

Lake Middleton and Ohau C were identified for disposal.

Five management options were then investigated for the camps recommended to be retained, including. -

A lease or ground lease was identified as the best option. It offered the best chance of a long-term return to the council and lessee, gave the lessee a vested interest in the camp's success and was transparent and easily managed.

A second option was offering a management contract for a two to three-year term.

The Waimate District Council operates camp sites on the north side of Lakes Waitaki and Aviemore, but does not have the same financial issues and is not changing management. Its costs are lower because the sites are close together, making them cheaper to operate.

In contrast, Waitaki's sites stretch from Lake Ohau to just east of Otematata on Lake Aviemore.

The facts
• Managed by the Waitaki District Council.
• Nine campsites at Lakes Aviemore, Benmore and Ohau.
• Two (Ohau C and Falstone) already under private management.
• Crown-owned with management vested in council for camping.
• Offer ''Kiwi camping - roughing it experience''.
• Basic facilities of untreated water, rubbish collection, effluent dumping stations and toilets.
• Open third Saturday in September.
• Close first Sunday in May.
• Ratepayer input $25,000 to $272,000 a year.
• Projected injection of between $196,650 and $860,000 a year over next five years.
• Season ticket $460; per night $15 family or $8 per person