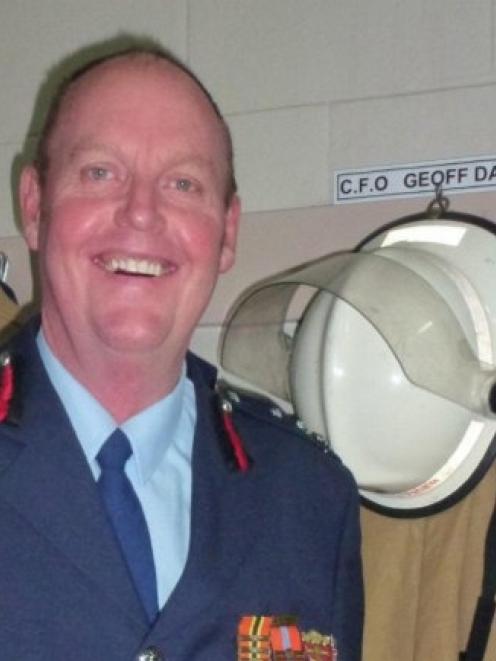 Mr Davis, of Palmerston, was with the brigade for 37 years. He was chief fire officer for six and a-half years, and deputy chief for 10.

He was approached to join the brigade in 1975, at the age of 23, by the chief fire officer at the time, Bill Lester.

Mr Davis said he joined because he thought it would be exciting, and also be a way of giving something back to the community.

Some fires had been challenging to fight, he said.

In the 1975 "big wind", the brigade worked all night until the wind finally dropped and the fires could be extinguished.

It was also difficult to deal with fatalities from motor vehicle accidents, Mr Davis said.

The upside was the feeling that volunteer work with the brigade was a really good community service.

Mr Davis said the recognition given when the brigade was nominated for the Waihemo TrustPower community award at Palmerston two years ago was "great".

The brigade won the Waihemo awards and then went on to compete in the national TrustPower awards in Tauranga.

It did not win at the national awards but gained an appreciation of the tasks undertaken by volunteers throughout New Zealand.

The fire tenders used in Palmerston improved over the years, Mr Davis said.

The first engine he encountered was a 1953 Bedford where the volunteers held on at the back of the vehicle.

Mr Davis paid tribute to the employers in the Palmerston area who gave great support when day-time callouts required their staff members to leave work.

The demands of service could also be tough for self-employed members of the brigade, who often had to put in more time when they returned to work after a callout.

The Palmerston brigade had averaged about one callout a week over the last year, Mr Davis said.

He had been called out several years on Christmas Day and on family birthdays.

The new chief fire officer is Gary Johnston, of Palmerston.