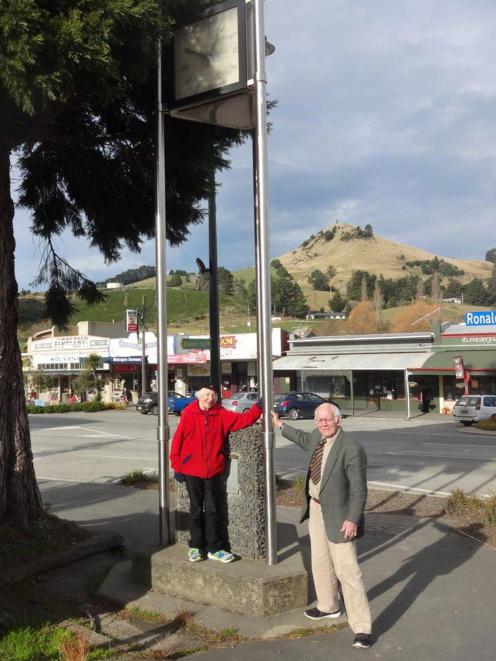 Palmerston booksellers Jim and Beth Moffat at the Palmerston town clock, which has been stopped at 12.50 for a year. Photo: Bill Campbell.
A broken town clock has led to the formation of a ratepayers association in Palmerston.

The town clock, installed to mark the centenary of the Waihemo County Council in 1982, has not shown the correct time for more than a year.

Efforts by Palmerston booksellers Jim and Beth Moffat to persuade the Waitaki District Council and the Waihemo Community Board to repair it have been unsuccessful so far.

Mr Moffat said the failure of the council and the board to repair the clock, or even to put the need for its repairs on the community board meeting agenda after a promise to do so at a public meeting held in Palmerston several months ago, had led to the decision to form a ratepayers association, Mr Moffat said.

The proposal for an association was advertised locally and attracted a good response.

Mr Moffat felt that little money was being spent in Palmerston by the Waitaki District Council compared with that being spent on council projects in Oamaru.

A meeting to form a ratepayers association would be held soon, he said.

The town clock showed the correct time only twice each day as the hands had stopped at 12.50.

Oamaru clock repairer John Mather, of Mather's Jewellery and Time, who has held a contract to maintain the clock said getting parts had proved difficult.

He had put in a quote to the Waitaki District Council to replace the clock a year ago and had not heard back.

Waitaki Mayor Gary Kircher said the council was attempting to source the clock parts in Australia.

The lock to the clock had been vandalised, which added a further complication, he said.

A report on the Palmerston clock, including costs, would be prepared by council staff for the Waihemo Community Board meeting on September 25, a Waitaki District Council spokeswoman said.

So far, 24 people had joined the association.